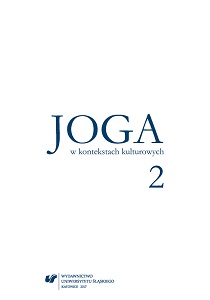 Author(s): Ewa Kosowska
Subject(s): Social Sciences, Fine Arts / Performing Arts, Sociology, Health and medicine and law
Published by: Wydawnictwo Uniwersytetu Śląskiego
Keywords: yoga; cultural context
Summary/Abstract: The concept of the cultural context became firmly established in the anthropological discourse in the second half of the 20th century, inter alia as a result of the inspiration furnished by linguistic pursuits. Contextual research, both in linguistics and inanthropology, refers by the very nature of things to the patterns of behaviour which were formed in the past. The development of the particular ethnic languages which generated peculiar systems of communication of a particular group of users was associated during a relatively long period of time with the development of relatively dissimilar cultures, whose carriers quite frequently recognised familiar solutions, transmitted from one generation to another, as the only legitimate and worthwhile ones. The principle “one’s own – foreign” demanded to honour not only the output of one’s own community but also to treat it as model output, which was supposed to be disseminated among other people (cultural expansion) or at least to be protected against foreign influence (cultural safeguarding). Inter-group contacts, which resulted in the percolation of subjects, patterns of behaviour, and ideas between cultures, which were familiar for a long time, which assume various forms, and which nowadays are disseminated on an unprecedented scale, were not held in all periods in such high estimation as they are today. Therefore the development of the particular cultures, relatively isolated ones and left to their own devices to a considerable extent, proceeded at various rates and brought about the diversity which on the one hand the adherents of globalisation attempt to minimise, and on the other hand – to use in pursuit of optimal, commonly effective solutions. The accomplishments of scientific and technical civilisation continue to unify the material layer of many cultures of the world, suggesting in an indirect way that in other dimensions such unification is not only possible but even inevitable. However, we are dealing with processes and mechanisms whose functioning eludes control and sometimes makes itself manifest in unexpected ways.Therefore as we examine closer this complex phenomenon, which became the object of the attention of the participants of the conference and as we study the possible range of adaptation of yoga in Europe, it is worthwhile to remember about the diverse cultural contexts which nowadays influence the extent to which its particular elements/aspects/ dimensions are understood and accepted.