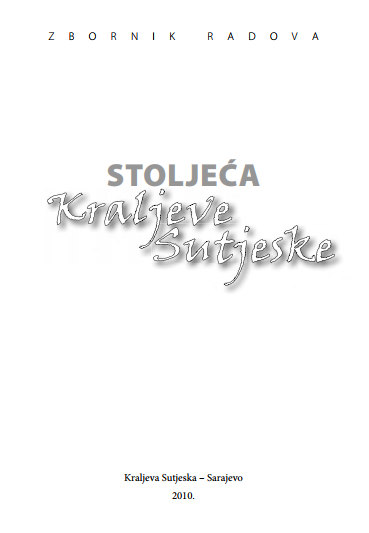 Author(s): Dubravko Lovrenović
Subject(s): History, Middle Ages, 13th to 14th Centuries
Published by: Franjevačka teologija Sarajevo
Keywords: Bosnia; middle ages; kingdom; Trstivnica; palace; repromulgation; 1377;
Summary/Abstract: The act of proclaiming the Bosnian Kingdom in 1377, which had been preceded by the reform of the royal chancellery of Tvrtko I Kotromanić in the spirit of the diplomatic norms of the ruling Serbian chancellery, resulted in applying these norms in the field of sacral and political representation in the creation of the new state and to its end in 1463. This is particularly apparent in the arengae of Cyrillic charters related to the correspondence between Bosnian rulers and Dubrovnik, the closest and most important ecclesiastical, political and economic partner of the Medieval Bosnian State. Of course that ecclesiastical-law terminology was not mechanically adopted, and was not a decorative element of documents, but rather had the goal of serving a fundamental purpose: to describe the new juridical, ecclesiastical and ideological reality that had emerged with the transformation of Bosnian bannats in the kingdom; this is most completely represented in the arenga as a key part of the document containing political actuality and propagating state ideas and the virtue of monarchy. Th e introduction of the Raška arenga with its ecclesiastical language and new system of ecclesiastical political ideas indicates the transformation of the ruling ideology of Kotromanićes from the ruler-autocrat model represented by the identification of ban Stjepan II, Prince Vladislav and Tvrtko I Kotromanić with Saint Gregory Wonderworker in the ruler-autocrat model, whose foundation was in the dynastic holiness of Serbian Orthodox Nemanjićes. This new system of state ideas was supported by the syntagms which, with the greater part of them copied from Serbian diplomatic material as of 1377, embellished the Bosnian royal and governmental documents: „...“ Nevertheless, this does not mean that the Medieval Bosnian Kingdom became only a “branch” of the Serbian Kingdom and did not have its own political and cultural identity. On the contrary, the endeavors are still present attributing this specific Slavic political formation first to the embodiment of the national spirit, the Croatian people – the so-called Ruler Trpimirovićes – and then even to the Serbian ruling dynasty of Nemanjićes before they were painted over by the integral political programs of the second half of the XIX century, when the question Whose is Bosnia? was asked; rather, the stronghold is in the historical science conducted under the principle: Sine ira et studio. Th us, without hatred and biasness, fairly, objectively and justly. For the historiography of the open horizon to the past and to the future. Of course, this is within the premises which Ryszard Kapuściński discusses.