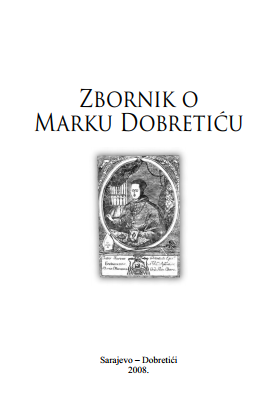 Author(s): Dubravko Lovrenović
Subject(s): Christian Theology and Religion, History, Middle Ages, Other Christian Denominations
Published by: Franjevačka teologija Sarajevo
Keywords: St Grgur; wonder; Kotromanić; Bosnia; medieval age;
Summary/Abstract: Honouring eastern saint Gregory the Miracle-worker and his state-building role began and spread in mediaeval Bosnia through the schismatic Bosnian Church. Besides its being not papacy-approved, this saint’s recognition as patron of the ruling Kotromanić dynasty came through the establishment of the new territorial Church after the Catholic bishopric see had been transferred from Bosnia to Đakovo in the mid-thirteenth century. This means that it was an autonomous act of the then Bosnian political and ecclesiastical structures in search of a new identity (confessional) form. Thus over a 70-year span, between the bishopric see transfer from Bosnia to Đakovo and Ban Stjepan II Kotromanić’s taking power, beyond Rome’s jurisdiction, St Gregory the Miracle-worker was promoted the Kotromanićes’ patron. The new state Church of Basilian orientation and the dynastic patron whose name is incorporated in the intitulation of Ban Stjepan II, Prince Vladislaus, and Ban Tvrtko I Kotromanić are a notional pair describing the new ecclesiastical and political reality of mediaeval Bosnia and its ruling dynasty respectively. Search of the original sense of this intitulation, which according to the available sources was maintained for 40-odd years (1326/29-1370/74), leads to the Byzantine “commonwealth” area and the world of legitimistic perceptions built under the influence of Byzantine ruling titulature. When in the autumn of 1461 Pope Pius II, after unsuccessful attempts directed from Rome to establish Bosnian Bishopric, proclaimed, i.e. confirmed, St Gregory the Miracle-worker patron of the Bosnian Kingdom, ecclesiastical-political circumstances were radically different, marked by the sending of the Papal Crown to King Stjepan Tomašević (1461-1463). While St Gregory the Miracle-worker, after his official promotion, remained somehow in the background at least in contemporary documents – true, his name was permanently “built” into the court chapel at Trstivnica – another eastern saint was also given his role in the identification of the Bosnian ruling dynasty. On the coins of kings Tvrtko II Tvrtković (1421-1443) and Stjepan Tomaš (1443-1461), featuring is the figure of St Gregory of Naziansus – bishop and close associate and disciple of St Basil, one of the Eastern Church Fathers, the only one granted the title of theologian – Gregory the Theologian (329-388). This clearly points to the establishment of a cult of this (new) eastern saint related, like St Gregory the Miracle-worker’s cult, to the Bosnian Church. This will become clear especially when the figure of St Gregory, pope, instead of St Gregory of Naziansus, appears on the coins of King Tomaš after his official acceptance of Catholicism in 1445 – when one of the Eastern Church Fathers was replaced by one of the four Latin Church Fathers. This time once more arbitration was with the new ecclesiastical political paradigm represented in a new symbol. Despite the fact that after Tvrtko I its deceased kings were considered saints, mediaeval Bosnia did not develop the ideal of the king-saint in the form established in the countries of West and East-central Europe. This means that in Bosnia the king-saint ideal, like in the case of ruling intitulation referring to St Gregory the Miracle-worker, remained limited to the internal use. Thus the Bosnian ecclesiastical-political contorted paradigm becomes even more visible, and the need for its fuller scientific evaluation more pronounced.