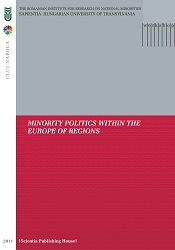 Author(s): Maik Schmerbauch
Subject(s): Politics / Political Sciences
Published by: Scientia
Keywords: Catholic church; German Catholic minority;Upper Silesia minorities
Summary/Abstract: With the exception of my researches and investigations during the last years, there has not been any scientific or modern research on this topic in the (ecclesiastical) history, although the relationship between the Catholic Church and the German Catholic minority in the diocese of Kattowitz between 1922 and 1939 was a very interesting and important period of the twentieth century ecclesiastical history. After the defeat of the German Empire at the end of the First Word War in 1918, the German province of Upper Silesia was divided by the Völkerbund between Poland and Germany in 1922. So the eastern part of Upper Silesia, with the important industry area of Kattowitz and Königshütte, went to Poland. In this area, there had lived over one million inhabitants of Polish and German origin, although the Upper Silesian folklore has been a mixed one with German and Polish elements intermingled for centuries so that one couldn’t identify a person as expressly German or Polish. Normally, a person identified his nationality with the language he spoken and the confession to his own folklore. So, after 1922, there has been a big exodus of German Upper Silesians from this part into the German Empire while Polish people came to the new Polish Upper Silesia from all parts of this country. Finally, around 20% of German people remained in this area as a political minority in the Polish Wojewodschaft of Silesia between 1922 and 1939. This political process has caused a changing process even in the Catholic Church. Upper Silesia was a very Catholic part and in 1922 it belonged to the big German diocese of Breslau with Bishop Cardinal Bertram. After 1922, the Holy See decided to create a new diocese in the part of East-Upper Silesia that was divided from Germany. So, in 1925, the Holy Seat created the new Polish diocese of Kattowitz with its first bishop, Cardinal Hlond, who was followed by Arkadisuz Lisiecki (1926-1930) and then Stanislaus Adamski (1930-1967). For the new Polish diocese, the existence of a Catholic minority they now had to take care was a new experience in this area. For centuries, German and Polish Catholics had lived peacefully in their community, shared the churches for the services, praised together, and went together to the big pilgrim places in Upper Silesia such as Annaberg or Piekary. Because of the political change in 1922, there has developed a great mistrust between German and Polish inhabitants not only in general matters but also in the Catholic life. Consequently, the German Catholics were angry to lose their former way of life in the church they had enjoyed as German citizens. The Bishop of Kattowitz and his priests recognised this problem in their communities and tried everything to avoid political problems in the Catholic Church during the time between 1922 and 1939. For them, it was clear that regarding faith, there could not be a difference between the faith of a German and that of a Polish. The Church was the shelter without any folkloristic problems. But this matter was hard to manage. The German priests tried for several of times to avoid radicalism among the German Catholics during the period between 1922 and 1939. They provided and supported the German Catholic societies: the children, the youth, men, and women all went together to the great pilgrim places; they taught them about social and religious life and warned them not to believe in the new political systems of Nazism and communism, which tried to convince the German faithful to their ideology. With their efforts, the Catholic Church could convince the majority of the German Catholics very successfully to stay in the Church until the end of the thirties. This time, the political situation between Germany and Poland changed for the worse, and the Polish government of Upper Silesia began to persecute a lot of societies and magazines of the German minority until the beginning of World War 2 in 1939, which could not be prevented even by the Catholic Church. So, the discussion and exploration of this area of the twentieth century ecclesiastical history is expected to be a huge project with new results for the current research. I think, this project is going to give new perspectives to minority research in Catholic theology and will offer new ways how to handle as Catholics a religious community living in minority.

Book: MINORITY POLITICS WITHIN THE EUROPE OF REGIONS