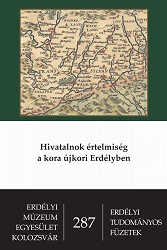 Author(s): Dáné Veronka
Subject(s): 16th Century, 17th Century
Published by: Erdélyi Múzeum-Egyesület
Keywords: cubicularii; Bálintffy family of Marosjára
Summary/Abstract: The paper continues the inquiries concerning the cubicularii, started by Zsolt Trócsányi – expert researcher of the central government of the Principality of Transylvania –, through the presentation of the lives and careers a family which held the office almost in a hereditary manner: the Bálintffys of Marosjára. Although Trócsányi knew certain members of the Bálintffy family (landowners in Marosjára, Torda County) – a father and two sons –, but since they used different (family) names, he did not manage to connect them. Owing to the investigations of the author, it was revealed that the family’s rise was launched by Bálint/Valentinus litteratus from Marosvásárhely, who came from a commoner family– called Kötélverő/Köteles, later Vásárhelyi – which had been granted nobility. First, he became a notary at the Minor Chancery (cancellaria minor), then, at the peak of his career, he served as the praefectus of the treasury. The second generation is represented by his two sons, Kristóf and István, who converted to Catholicism. They both became cubicularii, but, despite possessing the same title, they fulfilled absolutely different roles. István – who had been a student at Vienna, then died at a young age – dealt with several of the Prince’s confidential affairs, while Kristóf can be considered as a true expert of finance: the peak of his career was the office of generalis perceptor. Their favourable marriages also helped them become established in the central government: Bálint/Valentinus litteratus and Kristóf both married within the “guild”, marrying the sisters of his colleagues from renowned, wealthy burgher families of Kolozsvár (Balásfi, Bornemisza), becoming related to the Lisbona family of mining contractors. Thus, they came to possess not only the land in Marosjára but also real estate and capital in Kolozsvár and Gyulafehérvár. The career of this highly promising dynasty of state officials was broken by Prince György Rákóczi I, who started proceedings against Kristóf – confidential adherent of Gábor Bethlen – under the pretext of “misappropriation”. Out of the three sons of Kristóf (deceased during the proceedings), two were pushed out not only of office but of the country as well. The case of the Bálintffys does not only exemplify the origins and career of people in finance management, it also clearly points out that the term cubicularius indicated different offices. The clarification and precise definition of its range of functions require further research.

„Mennyi jobbágya és mennyi portiója”. Torda vármegye birtokos társadalma a 17. század első felében "How much serfs and how much portion". The Community of Estate Owners in Torda (Turda) County in the First Half of the 17th Century 2016
2022 © CEEOL. ALL Rights Reserved. Privacy Policy | Terms & Conditions of use
ICB - InterConsult Bulgaria core ver.2.0.1201