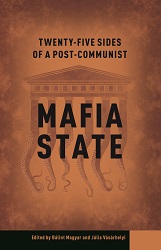 Author(s): Krisztián Ungváry
Subject(s): Post-War period (1950 - 1989), Present Times (2010 - today), History of Communism
Published by: Central European University Press
Keywords: Political parties;Hungary;historical memory;reevaluation of history;House of Terror;double-faced policy
Summary/Abstract: The historical memory of a society reflects its political situation. In the last two and a half decades, the political system radically changed in Hungary,and a reevaluation of the historical past is completely natural after such a change of regime. In a country where after 1945 the (first clandestine,but soon open) dictatorship of the Communist Party made any discussion of the past all but impossible, with the communist view of history being forced on the society, the years of the transition should have brought significant changes in symbolic memory. Yet, looking back on those years, it is surprising how little changed in the first decade after the regime change,and how much a decade later.The failures of the socialist–liberal government, the economic crisis, and the policy of Fidesz are all responsible for the renaissance of extreme rightwing ideas, though not to the same extent. What proved decisive is the elevation of a memory politics that is compatible with Jobbik to the status of state policy—a continuation, in fact, of the slogan “One camp, one banner.”This policy proved to be a success to a certain extent, as today the rightwing interpretation of history dominates in Hungarian society. This politics legitimizes figures who can only be despised in Western Europe. Far from being a temporary phenomenon, the radical shift is more and more marked in Hungary. Similarly to the situation in Poland, a social democratic renaissance is quite unlikely to happen in Hungary any time soon. Neither has the former state party any chance to return to power. As opposed to Poland, however, liberals have no chance either in Hungary—they are not even represented in the parliament any longer. For the time being, only Fidesz is capable of keeping Jobbik at bay. This, however, should not make us forget that there is no clear boundary line between the view of history of the two parties, a fact that is the result of Fidesz’s double-faced policy. Will there be anything to convince voters, fed by dangerous ideological fodder, to use their common sense, and choose a democratic option at the time of crisis and social conflict? The answer to this question is shrouded in obscurity.