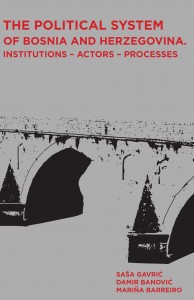 Author(s): Author Not Specified
Subject(s): Politics, Government/Political systems
Published by: Sarajevo Open Centre
Keywords: introduction; political system; BiH;
Summary/Abstract: Bosnia and Herzegovina is a very young sovereign state and has little to look back on in its young Statehood experience. Even though it had been formally recognized as a Republic within Yugoslavia, it functioned as an administrative unit of the larger state. (Calic 1996: 45). Walking through the streets of Sarajevo, one will find evidence of a thousand years of foreign rule on every corner. In 1914, the capital of Bosnia and Herzegovina, Sarajevo, was the scene of the assassination of Franz Ferdinand, heir to the Austro–Hungarian throne, starting the First World War. In 1918, it joined the Kingdom of Serbs, Croats and Slovenes which, in 1929, became the Kingdom of Yugoslavia. After the Second World War, when its current state borders were established, Bosnia was part of the Federal National Republic of Yugoslavia (1946 Constitution), and from 1963, part of the Socialist Federal Republic of Yugoslavia. According to the principle of self-government, the 1974 Constitution guaranteed the republics and autonomous provinces further competencies, which was ultimately one factor that led to the dissolution of Yugoslavia (Calic 1996: 17). Discussions between Serbs and Croats regarding state reform and contradictions within the governing system proved unsuccessful in preserving the federal state. On October 15, 1991, following declarations of independence by Slovenia and Croatia, the parliament in Sarajevo also decided to part with Yugoslavia. At the demand of the European Union, a referendum was held on February 29 – March 1, 1992. The majority of citizens voted for independence (99.4%), but this percentage does not accurately represent the entire population, as a great number of Bosnian Serbs boycotted the referendum. The European Union and the United States recognized Bosnia and Herzegovina as an independent state on April 17, 1992. On May 22, Bosnia and Herzegovina became a member of the United Nations (Calic 1996: 44). By that time, conflict between Croats and the Yugoslav Peoples Army had already erupted. Bosnia and Herzegovina, as a multi-ethnic state centrally located in a geostrategic position, was dragged into and broken up by the conflict. The war between Croats and Serbs acted as “the accelerant to further segregation and disintegration processes” (Calic 1996: 70) and drove people to participate in great atrocities: mass killings, forced displacements and massacres. All three ethnic groups wanted the same territory, each to protect their own interests. Croats and Serbs had never seen Bosnia and Herzegovina as their homeland, but wanted to annex the territories where they had lived to the Motherlands. Franjo Tuđman and Slobodan Milošević had already agreed on how to divide the land. The Republika Srpska (RS), the Serb paramilitary state, declared its independence on January 9, 1992, but the international community did not recognize it, as Bosniaks had fought for the unity of “their” land (Gromes 2007: 143). From 1993 to 1994, war raged between Bosniaks and Croats in Bosnia and Herzegovina. Under pressure from the international community, Bosniaks and Croats signed the Washington Peace Agreement that led to the foundation of the Federation of Bosnia and Herzegovina and partly resolved the conflict in the region. However, the massacre in Srebrenica in July 1995, defined as genocide in one decision of The International Criminal Tribunal for the Former Yugoslavia (ICTY), reminded the world’s public of their helplessness and inability to act, leading to forceful United Nation (UN) and North Atlantic Treaty Organisation (NATO) military action. With NATO support, Croatian and Bosniak troops defeated the Serbian military forcing them to come to the negotiating table. The General Framework Agreement for Peace was completed on November 21, 1995 in Dayton (Ohio, U.S.), and signed on December 14, 1995 in Paris, France. Through its provisions and annexes, the Dayton Peace Agreement (DPA) ended the war and created the state of Bosnia and Herzegovina, but divided the country along ethnic lines, creating two entities (federal units): the Republika Srpska with a Serb majority (49% of territory), and the Federation of Bosnia and Herzegovina (FBiH) with a Bosniak and Croat majority (51% of territory) (Burg 1997: 141). Until the decision regarding Brčko District was delivered, the Brčko corridor remained under international supervision, administrated by the RS.