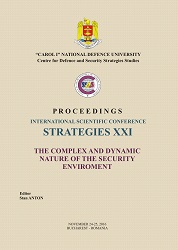 Author(s): Marin Butuc
Subject(s): Politics / Political Sciences
Published by: Carol I National Defence University Publishing House
Keywords: literary language; national language; culture language; national state; linguistic legislation; informational space; hybrid war
Summary/Abstract: According to international standards, the official language of a nation state represents a part of national security. Speaking about the official language in the Republic of Moldova and its degree of functionality, unfortunately it is obvious that historical language does not correspond to the official language present in a national, sovereign and independent state. In our opinion, this situation represents not only a linguistic danger at the level of correctness of Romanian language in the Republic of Moldova, but also a danger at the level of national security, in the case when propagandistic intentions of the Russian Federation are obvious, by using a wide range of mass-media sources, aiming at the impairment of values and aspirations of state politics.According to sociolinguistic theses, two literary languages cannot coexist in a nation state, because it conducts to an impairment. Therefore, the state faces a difficult situation, determined by the fact that it is supposed to promote two different cultures, and also two different national politics – actually, it represents an enormous paradox and absurdity.This situation does not correspond to the international standards, and it is obvious the fact that we live in a state, impaired in various domains: linguistics, culture, politics and mass-media. Nowadays, the most widely used language is not the language that involves great number of speakers, but the language that is spread in the field of mass-media (for example: Russian language functionality in the majority Former Soviet Countries). It represents that kind of language that has a bigger material support for being promoted, and it also monopolizes press and audiovisual. Thereby, it is necessary to adopt a new Legislation in the Republic of Moldova in the field of linguistics, and new laws in accordance to the international standards of an official language in an independent and sovereign state.