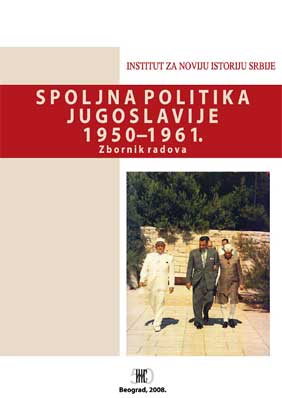 Author(s): Katarina Kovačević
Subject(s): Diplomatic history, Political history, Post-War period (1950 - 1989), History of Communism, Cold-War History
Published by: Institut za noviju istoriju Srbije
Keywords: Yugoslavia; Hungary; normalization of Yugoslav-Hungarian relations; Imre Nagy; Mátyás Rákosi
Summary/Abstract: During the late 1940s and early 1950s Hungary took the lead in fierce anti-Yugoslav propaganda by the Eastern Bloc. The Rajk’s trial marked the start of a ghastly series of death penalties, life sentences and long-term imprisonments in Hungary. Along with a strong media campaign, Yugoslavia continuously had the problem of frequent incidents along the border, which deteriorated the Yugoslav-Hungarian relations to the brink of armed conflict. Stalin’s death in March 1953 paved the way towards reconciliation between Yugo slavia and the Eastern Bloc. As in the previous era, Hungary was first, after the Soviet Union, to take the initiative for normalization of relations with Yugoslavia, which Belgrade used in order to dispense with the north border tension. Negotiations regarding this matter, as well as effort in forming a joint Yugoslav-Hungarian commission for investigating and identifying border incidents, began in the summer of 1953. However, Belgrade essentially acted with reserve, letting the other side take the initiative. After establishing diplomatic relations in August 1953, the border question was regulated and commercial trade contacts were restored during 1954. The Hungarian government even made steps towards the release of prisoners, Hungarian citizens and members of Yugoslav minority groups in Hungary. Nonetheless, the most important aspect for further development of Yugoslav-Hungarian relations was the suspension of the anti-Yugoslav campaign in the media in October 1954: the Yugoslav representative in Budapest, D. Soldatić, was informed of the Hungarian government’s decision to suspend the IB-emigration, to withdraw books and brochures of anti-Yugoslav character, and to ban the emigration newspapers. The existence of two different concepts regarding Hungarian internal development along with antagonism among their supporters, Imre Nagy and Mátyás Rákosi, di rectly infl uenced normalization of Yugoslav-Hungarian relations. Stagnation in further normalization of state and party relations was evident already in the end of 1954. Mutual reserve and distrust between the Yugoslav and Hungarian leadership was enormous: the Yugoslav conclusion was that closer relations with Hungary were impossible as long as Mátyás Rákosi was at the top.