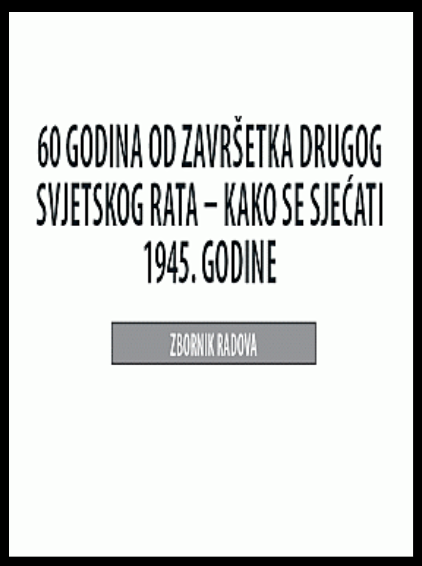 Author(s): Max Bergholz
Subject(s): History, Cultural history, Military history, Recent History (1900 till today), Special Historiographies:, WW II and following years (1940 - 1949), Post-War period (1950 - 1989)
Published by: Institut za istoriju
Summary/Abstract: This essay has two objectives: first, to better understand how Yugoslavia's communist regime went about constructing an officially-sanctioned memory of the Second World War through the building of monuments and graves for “fallen soldiers” (pali borci) and “victims of fascist terror” (žrtve fašističkog terora); second, to analyze how Yugoslav citizens reacted to such “sites of memory” from 1947 until 1965. I begin with a brief introduction to the activities of the Association of Veterans of the People’s Liberation War (Savez boraca Narodnooslobodilačkog rata [SBNOR, and then renamed SUBNOR in 1961]), the organization that I consider as the main vehicle through which “memory activists” in Tito’s Yugoslavia acted. I then move to an analysis of public responses to their memory-making activities vis a vis graves and monuments By analyzing archival documents, newspaper articles, and especially letters written to newspapers, I argue that, while many people did respond positively to these officially-sanctioned “sites of memory,” others reacted in a myriad of directly and indirectly confrontational ways. Allowing weeds and grass to engulf graves; permitting pigs to forage in front of monuments and tying horses to them; building monuments to anti-communist forces; telling jokes about monuments and harassing people trying to visit them; and smashing plaques and monuments into pieces, sometimes on several occasions; all of these behaviors suggest that a serious disjuncture existed between the projects which SBNOR’s memory activists were engaged in and some segments of the population’s degree of acceptance of them. I see this disjuncture as exemplified in two types of directly and indirectly confrontational behaviors: first, as indifference or perhaps disconnectedness to officially-sanctioned memories; second, as conscious resistance to such forms of remembrance. At the same time, it is important to note that the documents which serve as the central empirical basis for this essay demonstrate that a sizable group of Yugoslav citizens were also very much mobilized with the veterans of SBNOR in the project of constructing, reproducing and protecting a set of heroic memories about the “People’s Liberation War.” Taken together, the conclusions of this essay suggest the need to revise the existing literature on the history of the memory of the Second World War in Yugoslavia in several ways. It has been suggested by some scholars (e.g., Hoepken, 1999; Denich, 1994; and Hayden, 1994) that the communist regime's “official memory” of the war was constructed for a repressed society, and that this memory dissolved under the pressure of intellectuals during the country’s final decade of existence. This essay, which pays close attention to societal reactions to officially-sanctioned war memories in Yugoslavia, presents a different dynamic. That is, people were neither totally repressed by a certain set of memories about the war, nor simply passive and ready to be awakened by a group of intellectuals. Ordinary people reacted to graves and monuments—two of the most ubiquitous manifestations of “official memory” in Yugoslavia—in their own ways and on their on terms from the moment that such sites of remembrance were constructed. And their reactions, while often quite positive, were also indifferent and, at times, directly and indirectly confrontational and subversive.