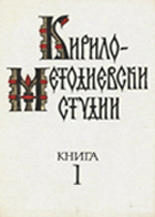 Author(s): Velcho T. Velchev
Subject(s): Language studies, Language and Literature Studies, Bulgarian Literature
Published by: Кирило-Методиевски научен център при Българска академия на науките
Summary/Abstract: The aim of the author is to demonstrate the significance of “The Announcement of the Gospel” for the Bulgarian and All-Slav cultures. The properties of this work were observed as early as 1858 when it was found, but the incorrect solution of the problem about its authorship rendered difficult the revelation of its cultural, historical and aesthetic values. The basic problems are three: about the authorship of ‘The Annuoncement of the Gospel’, its position in the context of the time of the epoch and its ideological problems. Discerning a work of Constantine-Cyril the Philosopher in “The Announcement of the Gospel”, the author cites additional evidence in favour of the thesis upheld by the majority of modern researchers in this respect: attention is drawn to the similarity between the lyrical character in the poem and the characteristic of the enlighteners of Slavadom, evidence in works dedicated to his life and activities. Dating “The Announcement of the Gospel” to the Early Middle Ages, the author links its appearance to the formation of European nationalities, to the transition of the Slav peoples from paganism to Christianity, etc. Most of the attention focused on it deals with the idea about the announcement in connection with the philosophical viewpoints of Constantine-Cyril, which point to the hierarchial system of the world and man’s place in it, and to the Christianized Neoplatonism of the Pseudo-Dionysius Areopagitus. In the opinion of the author, “The Announcement of the Gospel” by its ideological purposefulness and emotional entity constitutes an apotheosis of Slav speech, literature and books, whose appearance Constantine-Cyril the Philosopher enthusiastically proclaims, addressing not individual Slav peoples, but the whole of the Slav world – the Slav macroethnos. Thus, in the Early Middle Ages he marked in an imposing poetical manner in the language of the Bulgarian Slavs – the Old Bulgarian, the appearance of a new culture which in analogy with those of the Greek and Latin languages should be called a Slav language culture. Making a broader assessment of “The Announcement of the Gospel”, the author perceives in it an expression of the self-determination and recognition of the Slav ethnos, having stated in a strong voice its existence to Medieval Europe in the second half of the 9th century. Although it appeared in the Byzantine Empire and was close to its cultural traditions, “The Announcement of the Gospel” by Constantine-Cyril the Philosopher possesses the merits of the first unprecedented poetical work of this country's literature, a literature Bulgarian and All-Slav and marks the beginnings of an original cultural and literary tradition with promising prospects.