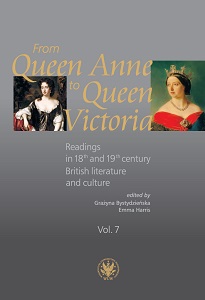 Author(s): Dominic Rainsford
Subject(s): Theoretical Linguistics, Applied Linguistics, Studies of Literature, Philology, History of Art, British Literature
Published by: Wydawnictwa Uniwersytetu Warszawskiego
Keywords: time; Pickwick Papers; Dickens; personal history; public events
Summary/Abstract: The action of "The Pickwick Papers" begins in 1827, ten years before the novel was published. Quite how seriously we should take this date is debateable. In Chapter 2, Mr Jingle claims to have been present at the deposition of the Bourbons, which leads Dickens to issue a correction (of sorts) in a footnote to the 1847 edition: “A remarkable instance of the prophetic force of Mr Jingle’s imagination; this dialogue occurring in the year 1827, and the Revolution in 1830”. So, Dickens was not exactly scrupulous in setting up the novel’s original chronology, and may have thought that being so would have been slightly absurd (a kind of Pickwickian pedantry). Nevertheless, he does eventually spot the mistake with the Bourbons, and draws attention to it. And there are reasons for thinking that, in some ways, he may have been deeply invested in 1827 as the opening year. To be precise, "Pickwick" begins in May of that year, a month that Dickens will have vividly recalled, as it was then, as a 15-year-old office boy in Gray’s Inn, that he began his white-collar career. In fact, it is by no means impossible that May 12th, 1827, the day on which Mr Pickwick delivers his epoch-making paper on ponds and ‘tittlebats’, may have been the very day (in the real world) on which young Charles began work. Taking its starting point from a range of internal and external hints, forms of evidence, and loose ends, such as these, this article anatomises the dating of "Pickwick" in terms of Dickens’s personal history; his sense of the social and political specifics of the 1820s; the amateur antiquarianism that is satirised within the novel; and its fictional placement in a literary no-man’s-land between Romanticism and the Victorian.