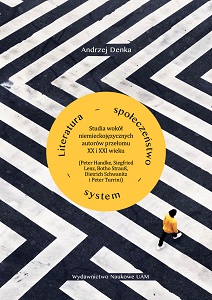 Author(s): Andrzej Denka
Subject(s): Language and Literature Studies, Studies of Literature, German Literature
Published by: Wydawnictwo Naukowe Uniwersytetu Adama Mickiewicza
Keywords: systems theory, Niklas Luhmann; systemic literature studies; dispute; media; politics vs. Literature; German-language literature; late 20th and early 21st century
Summary/Abstract: This monograph provides selected studies on writers of German and Austrian literature. These studies draw from particular aspects of Niklas Luhmann's Systems Theory, which, although developed within sociology, can be applied to other research fields, such as economics, law, political science, and finally, literary studies. The author of this monograph explains the possible applications of this theory to the issues of conflict, literary scandal, controversial engagements of writers, and also the variety of possible interpretations of literary texts. The conflict around last year’s Literary Nobel Prize winner, Peter Handke, which arose due to his engagement in support of the Serbian case, is presented here as a clash of opinions, as well as their adjustment to a particular line of argument, which, thanks to the media, aims at processing social irritation. In the case of Siegfried Lenz, the aim of the study is to prove the connection between his political views and purely literary activity in the light of substantial system distinctions. Such writers as Botho Strauß and Dietrich Schwanitz are presented here as ones who consciously adapt various theoretical systemic concepts to construct their own literary texts (essays, prose). When interpreting Peter Turrini’s play, on the other hand, the category of 'framing' has been applied along with the relationship between the internal and external references. These analyses are complemented by two theoretical chapters that provide an overview of the most important concepts of the systemic literary studies, which are relatively unfamiliar in Poland, by presenting them against the background of the scholarly tradition.