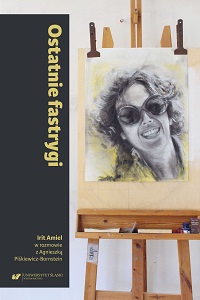 Author(s): Irit Amiel, Agnieszka Piśkiewicz-Bornstein
Subject(s): Polish Literature, Other Language Literature, History of the Holocaust, Theory of Literature
ISSN: 2720-1597
Published by: Wydawnictwo Uniwersytetu Śląskiego
Keywords: Irit Amiel; conversation; Holocaust literature
Summary/Abstract: Drawn from conversations with Irit Amiel, the author of the famous Osmalone, Ostatnie fastrygi is, in a sense, her testament, her last, though not final, literary word. Sensing that she is writing for the last time, the writer once again tells her secretary, Agnieszka Piśkiewicz-Bornstein, her own biography and answers a number of previously unasked, sometimes quite uncomfortable questions, but this time she also lets herself be guided into various little alleys – she reveals details about Częstochowa, the ghetto, her first years in Israel, and raising her children. She also dissects the literature of the Holocaust, her relationship with Poland and with God. She is as strong and convincing in her judgments as she is in her feelings. It is also the first time she lets another person get so close to her, which is why Ostatnie fastrygi is also a masterpiece of intimate, long-running conversation, but a very meandering and warm one. The book is supplemented by numerous colour photos from the family album, footnotes, and an afterword.