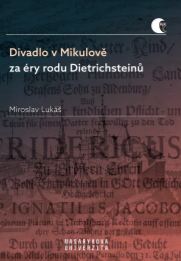 Divadlo v Mikulově za éry rodu Dietrichsteinů : (od konce 16. století do druhé světové války)
Theater in Mikulov during the era of the Dietrichstein Family : From the end of the 16th century to the Second World War

Author(s): Miroslav Lukáš
Contributor(s): Jana Horáková (Editor), Katarina Petrovićová (Editor), Vendula Hromádková (Editor)
Subject(s): History, Theatre, Dance, Performing Arts, Fine Arts / Performing Arts, Cultural history, Social history, Modern Age, Recent History (1900 till today), Pre-WW I & WW I (1900 -1919), Interwar Period (1920 - 1939), History of Art
Published by: Masarykova univerzita nakladatelství
Keywords: Czech Republic; Mikulov; theater; Dietrichstein Family; end of the 16th century; WWII;
Summary/Abstract: The thesis aims to map the theater life in Mikulov between the period when the estate belonged to the aristocratic family of the Dietrichsteins until the beginning of the World War II. The large time span of the scope understandably, has its negatives, as it does not allow a more thorough analysis of the Piarist school theatre in Mikulov. On the other hand, it enabled greater heuristic research, the results of which are collected here and offered to the needs of further researchers interested in the history of theater in Moravia and Silesia. The most important period in the history of theater in Mikulov, which currently has a significant overlap to the development of the Central European theater, begins with the era of Cardinal Dietrichstein in the first half of the 17th century, when Mikulov became an important political and cultural-social as well as religious center of Moravia. At that time the oldest castle theater in our territory was built and simultaneously the Piarists arrived, they used the theater as an educative tool. Piarist school theater remained the main mediator in performing arts in the city until the mid-18th century. The peak of the designated period came with the reign of Leopold Josef of Dietrichstein in the turn of the 17th and 18th centuries. Archival materials revealed Leopold as a significant lover of the performing arts, who had been in touch with theater since his childhood, whether at the Jesuit college or during his own activities in the home theater. Later on, he became a supporter of professional theater companies. During his reign, there was a significant heyday of the Piarist school theater, which managed to produce three performances per year. Two synopsis of Piarists’ plays from this period involves an interesting phrase “Nickolspurgerischen Parnasso” which emphasizes the importance of the performing arts in Mikulov together with its position in the contemporary consciousness. The professional traveling theater companies also played an important role in the theatre history of Mikulov. We can trace the presence of these travelling theatre companies from the end of the Thirty Years War. Records concerning their stay in Mikulov are unfortunately very scattered. They can be traced predominantly in the accounting documents of the Dietrichstein family, which proves that their performances had a connection with entertainment of nobility. From the second half of the 18th century, we can also work with requests from the theater directors who intended to perform their plays in the bourg. The Provincial Office, which usually approved these requests, however, did not grant the permission and rather limited the theater productions in the “small” subject towns. In the 19th century, the situation changed and theater companies increasingly appeared in Mikulov. From the second half of the same century, basically every year, unless there was a war or other unfortunate events, the city was visited by theater companies regularly. The repertoire included mostly comedies, farces, magical fable or “singspiele” and later mainly operettas. The repertoire varied according to the new trends stemming mainly from the Viennese theater environment. After the First World War, when the local German population became a minority in the newly established Czechoslovak Republic, the theater companies considered also national defensive and educative role of theater and they performed the dramas of German and Austrian classics. At the beginning of the 19th century the emancipated citizens tried to take over the initiative of the cultural life in Mikulov. At that time, unfortunately, they alluded to the limited possibilities of citizens and also the problem of inadequate facilities. The townspeople could occasionally use the castle areas for musical productions. For the operation the theater it was necessary to have a place with more permanent facilities, where it would be possible to build the stage and store the coulisse and props. Since 1812, the townspeople managed to get an space for the theater in the winter riding hall, but this cooperation lasted only until 1819, when it was (based on complaints) ended by Prince Franz Josef Dietrichstein. The problem of the shortage of suitable premises for holding the cultural and especially theater events in Mikulov continued into the early 20th century. This is a paradox, especially when there had been a piarist theater in the city since 1771, unfortunately it was unused at that time. A city theater that could be used by a professional travelling society did not exist at that time, even though this idea has existed in Mikulov, at least in the second half of the 19th century. There has never arisen any “German House”, where thelocal companies could meet, as was established in the nearby and smaller Valtice and Hustopeče towns. Theater companies and associations used the halls of local inns or a town shooting gallery for their per formances. Probably the most representative theatre scene in the modern history of the town was created in 1914 at the Hotel Rose. Translated text is an initial step for further research, which should facilitate a deeper understanding of Castle Theater, processing history piarist school theater and research theater activities of Leopold Ignác Dietrichstein. The presented study is an initial step for further research, which should help to facilitate a more elaborated understanding of castle theater, processing of the history of the piarist school theater and for a research of theater activities of Leopold Ignác Dietrichstein. These three branches of the research topics, which are mutually intertwined, are currently the most important stages in the theater life of Mikulov. Finally, the research also remains open for the roots of the important theater principal Johann Georg Gettner in Mikulov, whose years spent in Mikulov are still shrouded in mystery.