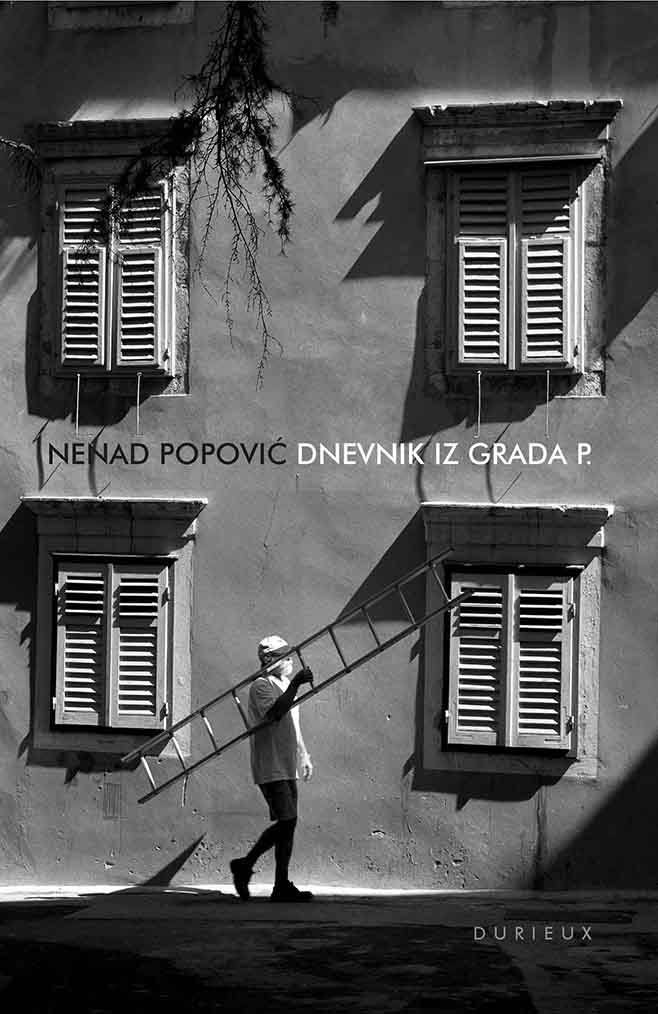 Dnevnik iz grada P.
Diary from the City of P.

Author(s): Nenad Popović
Subject(s): History, Cultural history, Political history, Cultural Essay, Political Essay, Societal Essay
Published by: Durieux
Keywords: Year 2013; The Balkans; Schengen; poverty; Pula; City of Pula; Kajkavian dialect;
Summary/Abstract: At the first sight, this book is a compilation of notes on private, political and social matters. However, it is far more than just that. The essays in the Diary form the City of P. tackle the signals of state poverty or, rather, state power that is barely noticed in Croatia; the books read only by a few in Croatia, the nearly unreal facts that are strange to almost nobody in Croatia. What does a microcosmos of a garbage bottles gatherer really look like? Where do the new highways lead to as they descend to the borders of Schengen Area, towards the unfortunate regions of the Balkans? How does a simple building demask the whole history of a former Austro-Hungarian war port? Finally, how did the Kajkavian dialect end up in the gutter, as a social caricature, during the language wars of the last 150 years? This diary, whose geographical determinant (a city by the sea), and a historical moment (the year of Croatia’s entrance into the EU) are a necessary context, is in fact unconventional anatomy of the reality that flows, thorough and encompassing at the same time. Publisher, translator, and writer Nenad Popović was born in Zagreb in 1950. He attended colleges in Zagreb and Bonn, and Freiburg with the scholarship Deutscher Akademischer Austauschdienst. He graduated in German Language and Literature and South Slavic Languages and Literature from the Zagreb Faculty of Humanities and Social Sciences. In 1980. he became an editor, and afterwards the head editor of the publishing house Graphical Institute of Croatia. In 1990. he co-founded the publishing house Durieux, one of the first independent private publishing houses in Croatia, where he worked as the head editor until 2013. In 1999. he participated in founding of the literary Group 99. In 2002 he became one of founders of the Croatian Writers’ Society, becoming its vice-president afterwards. Since 1978, he has occasionally written for newspapers, magazines and radio, and since 1985 for the media of German speaking countries (Manuskripte, Literatur und Kritik, Kulturaustausch, Frankfurter Rundschau, Die Zeit, Weltwoche, et al.). For theatre he translated such authors as Sternheim, Bruckner, Bernhard, Fassbinder among others. He also translated books by Erwin Piscator, Kazimir Malevič, Boris Kelemen, Benn Meyer-Wehlack, Tilla Durieux and Rainer Werner Fassbinder. During Bosnian wars, he translated articles by Bosnian writers (Karahasan, Lovrenović, Filipović, Jergović) for German newspapers and magazines. He published books A World in Shadow (2008), A Treatise on Population (2014), Diary from the City of P. (2017), and Living with Them (2021). For his work he received many awards and accolades: Premio '92 per il lavoro letterario from the Italian Cultural Institute in Zagreb (1992), The Leipzig Book Award for European Understanding (1999), and, with Freimut Duve, Bruno Kreisky Award (1999). He was also awarded the Hermann Kesten Medal by the German PEN Centre in 2000. The same year he became an honorary citizen of Sarajevo. He is a member of the following organisations: Croatian PEN Centre, Cap Anamur - German Emergency Doctors, Cologne; Journalisten helfen Journalisten, München; International Forum Bosnia, Sarajevo; Association of Literary Translators of Croatia. He lives in Pula.