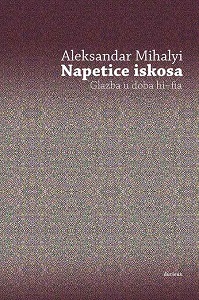 Author(s): Aleksandar Mihalyi
Subject(s): Anthropology, Social Sciences, Fine Arts / Performing Arts, Music, Sociology, Sociology of the arts, business, education
Published by: Durieux
Keywords: Soviet music; Russian music; Estonian music; New fascination with sound; Experimental music; Global mapping; Improvised; Authenticity; Alchemy of Top list; Urban aboriginal; minimal; Nordic;
Summary/Abstract: Askance Thrillers is a voluminous collection of texts on music written by the radio host and editor Aleksandar Mihalyi. Why Askance Thrillers? Because the music scene is so divergent (judging by theoretical texts and the heterogeneity in style and genre), that it blocks an easy access to its listeners, except for an exclusive access to individual groups. Simply put - each of the existing groups has its theoretical logistics that is dedicated to themselves, and that ignores the existence of others. Inside the groups and especially between them, there is a tension that is being hidden or heightened. If there was no intensive, strong and diverse music or audio creative scene behind this (with numerous participants and manifestations), these texts would not exist. The disunity is a consequence of the lack of a dominant creative model, and, paradoxically, that is the reason we have such a rich and pluralistic scene. How good it is and what is good about it is left without clear and unambiguous answer. The scale of value is established inside the borders of a group or an ism. The book shows the exceptional wealth offered by the contemporary music scene in its possible development. Never in the history has an individual been offered such a divergent scene of the contemporary music: Bach’s Mass in B Minor with Ton Koopman, Einstein on the Beach by Philip Glass, directed by Robert Wilson and performed by his ensemble, In vain by Georg Friedrich Haas performed by Klangforum from Vienna or vocal performances of Ami Yoshida. What they have in common is the shock of the new or a dedication of excellent musicians, and reaching the cultural, interpretational and perceptive limits. We are contemporaries with all that! This book is also a kind of a Baedeker that will help you get an insight into what is going on, and who are the protagonists. Lastly, it will provide recommendations on what to choose to listen, watch and read among individual types of expression. The book is written to affirm the creation of order and quicker access to today’s music scene. Even the confusion of terms is too big, and restoring the order is Sisyphean task. For example, if you read that a composer belongs to eclecticism, postmodernism, polystylism, somewhat to Russian mysticism, spiritual minimalism, and that he has all the familiar characteristics of his generation, what do you expect to hear? This book offers an essential survey of the contemporary recorded music from early polyphony to laptop music. It is a guide for today’s music scene. Aleksandar Mihalyi was born in 1949, in Zagreb. He is a long-time editor of the discophilic magazine WAM. For twelve years he worked as a host and an editor of radio shows dedicated to the contemporary music on the Croatian Radio's Third Programme.