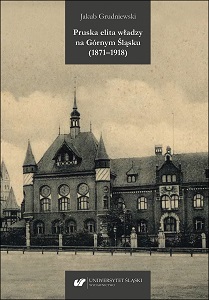 Author(s): Jakub Grudniewski
Subject(s): History, Local History / Microhistory, Political history, Social history, 19th Century, Pre-WW I & WW I (1900 -1919)
Published by: Wydawnictwo Uniwersytetu Śląskiego
Keywords: Upper Silesia; The German Empire; Opole regency; administrative system; landrat; circulation of elites
Summary/Abstract: The aim of this work is to present the power elite in the Upper Silesia (Opole region) of Prussia during the times of the German Empire (1871–1918). The initial caesura of the work consists in the unification of Germany under the aegis of Prussia. Shortly afterwards, important changes were made to Prussian domestic policy by issuing the district ordinance (1872), which was the legal basis for the functioning of the administration until the end of the monarchy. The introduction to the subject presents an outline of the administrative changes in the period preceding the annexation of part of Upper Silesia by Prussia – that is, in the time when it belonged entirely to the Habsburg Monarchy, and then in the time when most of the region was occupied by Prussia, incorporated administratively into the new state – and their evolution in the following decades, until the Napoleonic Wars. As a result of the establishment of a new administrative unit within the Prussian state in 1815, the Opole Regency, by analogy with other Prussian regions, the permanent officials at the highest level of authority were the eponymous elite and as such, the main subjects of the study. These included the presidents of the Opole Regency, the landrats (district starosts) and the mayors of Upper Silesian cities. The presidents of the regency, as direct representatives of the royal authority, stood at the highest level of the administrative hierarchy. They were responsible for managing internal politics, i.e. internal security, supervising political movements, matters related to education, infrastructure and others. The starosts, also called the landrats in Prussia, were the most important representatives of the policy of the Prussian state in the districts, the people carrying out the ideas of the Prussian monarchy. Their competences included controlling police matters and supervising the collection of taxes, as well as approving the village leaders in the municipalities. The landrat also presided over the meetings of the district council (Kreistag) and headed the new district authorities (Kreisausschüsse). He was also responsible for the newly established office of the head of the police district (Amtsvorsteher). The mayors, who ruled the largest cities in the region, were among the most important people in local government administration, and this was an honorary function. On the basis of the research conducted on the group of the Prussian administrative elite in Upper Silesia after 1871, it has been possible to determine the model features of the representative of this group. The author, by making a quantitative and qualitative sociohistorical analysis, has focused on issues such as: social origin, regional origin, religion, education, membership in student societies, preparatory service, promotion paths, military service, additional qualifications and distinctions. This analysis was accompanied by examples of careers of the power elite in Upper Silesia. An interesting thread for the research on the history of Upper Silesia presented in this monograph is the activity of the examined groups in the context of social and economic events, political views, attitude towards processes and phenomena specific for Upper Silesia, such as the organized Polish movement or the Catholic Church, which has historically enjoyed a special position in the region. In this context, the monograph describes the participation of the elite of the administrative power in the policy of Kulturkampf in the 1870s, as well as the attitude to the Catholic Center Party and the fight against ultramontanism. At the end of the nineteenth century, members of the power elite in Upper Silesia had to face the emerging Polish movement, represented at that time by a faction of the Center Party, which at the beginning of the twentieth century took the form of a national movement led by Wojciech Korfanty. The year 1918, which is not only the date of the disintegration of the Prussian monarchy, but also that of the dismantling of the royal administration, constitutes the closing caesura. This work is the first ever comprehensive publication on the subject, the fruit of many years of research on a group of more than 100 people, based on many hitherto unknown sources (including those from the Secret State Archives in Berlin). As a result of this work, the author has created an extensive database of the highest-ranking officials of the Opole Regency. In addition, he has presented conflicts with the circles of high-ranking Upper Silesian industrialists and the contribution of the power elite to the creation of the image of Upper Silesia that we know to this day.