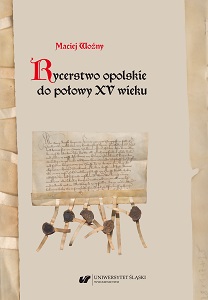 Author(s): Maciej Woźny
Subject(s): Local History / Microhistory, Military history, Political history, Social history, 13th to 14th Centuries, 15th Century
Published by: Wydawnictwo Uniwersytetu Śląskiego
Keywords: knights; nobility; genealogy; prosopography; Duchy of Opole; Duchy of Niemodlin; Duchy of Strzelce; Duchy of Głogów; heraldry; seals; offices
Summary/Abstract: Since the beginning of the 15th century, the Duchy of Opole went through subsequent stages of division into smaller duchies and repeated consolidation and division between the representatives of the Opole Piast dynasty. In turn, the local knights, who often held land in different regions of the land, needed to adapt to the changing districts. The first chapter discusses the division of the Duchy of Opole between the particular dukes. The borders of the administrative districts were in constant flux. It was also possible to notice the influence of knights possessing estates located along the borders on the subsequent shapes of the district border. Chapter two discusses the issues of terminology applied to the knights. It notices similar tendendcies in nomenclature with regard to the act of bestowing knighthood to other regions of Europe. The chapter also discusses the censure of knighthood. Chapter three is devoted to the composition and distribution of the knights of Opole. In the studied duchy, it was possible to identify more than three hundred families, of which in many cases there are only singular known representatives remaining. It is, therefore, difficult to assess the precise number of that social group in the studied area. Within the studied period of time, two families — the Bes family and the Strzała family — significantly surpassed other families when it comes to their wealth as well as, with time, their importance. The majority of the local families had medium or small (one village) estates, which could be extended through endowment from the local sovereign and subsequent purchase of land, coming to form a small complex of family holdings. This type of family development, which owed their prosperity to the duke, was a rarity according to the sources. For faithful service, local rulers rewarded knights with castles or towns. The knights owed predominantly allodial land and estates, even though some sources point to the existence of several estates which functioned as fiefdoms. Moreover, those families who arrived at the area from outside were in minority on the lands of the Opole Piast dynasty. Chapter four concerns the public activity of the knights of Opole. In a hundred and fifty years, he Duchy of Opole, similarly to the rest of Silesia, experienced significant changes in the structure of court and administrative offices. In the beginning of the 14th century, the most important official was the high bailiff, equivalent to the Silesian office of the palatine. The sources mention also the offices of the court justiciary, the master of the hunt, the deputy master of the hunt, and the procurator. In the second half of the 14th century, this hierarchy went through a gradual transformation, depending on the duchy. The most important office at court became the office of the marshal or chief steward. He was in charge of the treasurer, the master of the hunt, the deputy master of the hunt, the head chef and the chamberlain, whose function was reduced to managing the court servants. Apart from that, the chancellery also formed a part of the court office, though it was expanded only during the reign of Władysław II, who employed a chancellor. At other courts, those who worked at the chancellery were known as writers or notaries. The administrative offices underwent transformation as well. At the turn of the 14th century, the duchy was divided into castellanies, governed by a castellan. The local estates of the duke were managed by the steward. In time, the function of the castellan was diminished, while the official himself was more often known as a burgrave. Castellanies were substituted with districts. In this new administrative system, the most important office, apart from the duke himself, was that of a district head. He managed the stewards of local estates, justices of the peace as well as the burgraves who managed the castle and its crew.