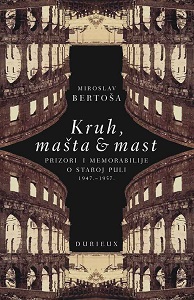 Author(s): Miroslav Bertoša
Subject(s): History, Cultural history, Local History / Microhistory, Social history, Culture and social structure , Post-War period (1950 - 1989)
Published by: Durieux
Summary/Abstract: Bertoša's approach to the first decade of post-WWII Pula (1947–1957) is distinctive and different, fresh and original, intimate and rich in content, far from generally accepted stereotypes and imposed ideological lessons. Because the past, as the Istrian and Croatian historian points, belongs to everyone. Within these unusual pages, Miroslav Bertoša opens a field of research neglected in Croatian historiography. It is about the so-called "pesonal history" (ego-histoire), or "intellectual biography", well known in Western European cultural circles. It is a history experienced by an individual in the dramatic context of survival and carried within himself during lifetime. Time that has just passed no longer has a political "owner" and ideological "supervisor", it becomes a segment of the past reality that can be experienced and documented from a personal, individual, exceptional and unrepeatable angle. Miroslav Bertoša (1938) is a historian and long-term scientific advisor at the Institute of Historical and Social Sciences of the Croatian Academy of Sciences and Arts (HAZU), now a professor at the University of Juraj Dobrila in Pula. First Consul General of the Republic of Croatia in Trieste (1995-1998). Associate member of HAZU. He began publishing essays, articles and critiques in 1954, and since 1963 he has been researching modern Istrian history and Istrian anti-fascism, as well social, political, demographic and ethnic components of the Venetian part of Istria and the northern Adriatic area from the 16th to the 18th century. He is a connoisseur of contemporary historiography, and especially of movements in the avant-garde French Annales school. Alongside Robert Matijašić he was coeditor of the Istrian Encyclopedia (2005).