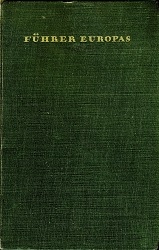 Author(s): Emil Ludwig
Subject(s): Pre-WW I & WW I (1900 -1919), Interwar Period (1920 - 1939)
Published by: CEEOL Collections / Digital Reproductions
Keywords: Fridtjof Nansen; Tomáš Garrigue Masaryk; Aristide Briand; Walther Rathenau; Giuseppe Motta; Eleftherios Venizelos; Lloyd George; Benito Mussolini; Josef Stalin;
Summary/Abstract: This volume is comprising biographies of Fridtjof Nansen, Tomáš Garrigue Masaryk, Aristide Briand, Walther Rathenau, Giuseppe Motta, Eleftherios Venizelos, Lloyd George, Benito Mussolini and Josef Stalin. // Emil Ludwig (originally named Emil Cohn) was born in Breslau, now part of Poland. Born into a Jewish family, he was raised as a non-Jew but was not baptized. “Many persons have become Jews since Hitler," he said. "I have been a Jew since the murder of Walther Rathenau [in 1922], from which date I have emphasized that I am a Jew.“ Ludwig studied law but chose writing as a career. At first he wrote plays and novellas, also working as a journalist. In 1906, he moved to Switzerland, but, during World War I, he worked as a foreign correspondent for the Berliner Tageblatt in Vienna and Istanbul. He became a Swiss citizen in 1932, later emigrating to the United States in 1940. // During the 1920s, he achieved international fame for his popular biographies which combined historical fact and fiction with psychological analysis. After his biography of Goethe was published in 1920, he wrote several similar biographies, including one about Bismarck (1922–24) and another about Jesus (1928). As Ludwig's biographies were popular outside of Germany and were widely translated, he was one of the fortunate émigrés who had an income while living in the United States. His writings were considered particularly dangerous by Goebbels, who mentioned him in his journal. (Wikipedia)