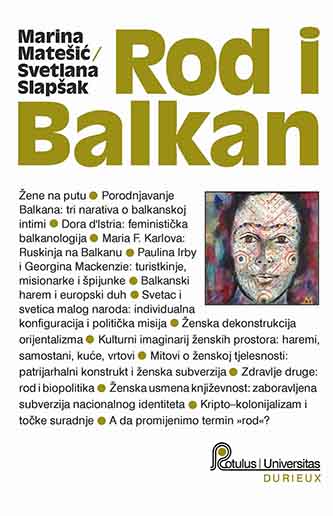 Rod i Balkan
Gender and the Balkans

Author(s): Marina Matešić, Svetlana Slapšak
Subject(s): Anthropology, Social Sciences, Gender Studies, Geography, Regional studies, Regional Geography, Sociology, Cultural Anthropology / Ethnology
Published by: Durieux
Keywords: gender studies; travelogue; protofeminism; Balkans; gender; gendering; mobility; hospitality;
Summary/Abstract: Marina Matešić's and Svetlana Slapšak's book Gender and Balkans incorporates two studies on gendering of Balkanism, i.e, on the gendered reading of Balkanism. In the forst part, the authors write about the historical practice of presenting the Balkans by male travelers only to contrast them with the travelogues by women authors of the 18th and 19th centuries, who broke down patriarchal representations of the Balkans. Analysing travelogues by Mary Wortley Montagu, Emily Strangford, Dora d’Istria, Jelena Dimitrijević, Maria Karlova, Paulina Irby and Georgina Mackenzie, Matešić and Slapšak infer that their protofeminist role frequently went hand in hand with their imperialist tendencies. The second study is about the gender situation in the 20th century Balkans. It questions the concept of gender, its appropriation for various arbitrary theses, and its subsequent contamination. The authors also indicate that the notion of mobility is politically marked. Svetlana Slapšak was born in 1948, in Belgrade, where she graduated in classical philology at the Faculty of Philology. Her PhD thesis was on the Vuk Karadžić's dictionary and calcs from Greek language. Slapšak worked at the Institute for Literature and Arts in Belgrade, and from 1986, she has been a professor at the Faculty of Arts in Ljubljana. She has published more than 50 books, and 400 scientific papers in anthropology, gender studies, Balkanology, and feminist criticism. She translated numerous books from latin, old Greek, French and English into Serbian language. For her work she was awarded several literary and peace awards. Marina Matešić was born in Split. She graduated in philosophy, literature and gender studies, and obtained her PhD with the thesis on gender anthropology at the Institutum Studiorum Humanitatis in Ljubljana. She won scholarships as a guest researcher at the Duke University in the USA, and the Humboldt–Universität in Berlin. Her areas of interest are the construction of gender and sexuality, cultural identities and migrations, feminism, Balkanology and postcolonialist criticism.