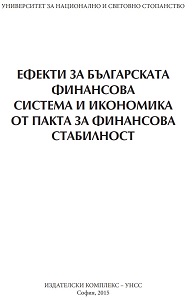 Author(s): Plamen Oresharski, Silvia Trifonova, Svetla Boneva, Atanas Atanasov, Irena Nikolaeva Christova
Contributor(s): Rumen Brusarski (Editor), Velcho Stoyanov (Editor)
Subject(s): Politics / Political Sciences, Politics, Economy, National Economy, Supranational / Global Economy, Financial Markets, Fiscal Politics / Budgeting
Published by: Университет за национално и световно стопанство (УНСС)
Keywords: Bulgaria; European Union; Fiscal Stability; Fiscal Compact; Treaty on Stability, Coordination and Governance in the Economic and Monetary Union; Financial Crisis; Government Debt; Fiscal Discipline; Macroeconomic Imbalances; European Semester
Summary/Abstract: This book presents the results from the in-depth scientific research about the effects on the Bulgarian economy and financial system emanating from the Fiscal Compact adopted by the European Union as a response to the widespread financial and economic crisis.The main goal of this research is to explore the nature, characteristics, reasons, and effects of the Fiscal Compact on the EU member states and Bulgaria, in particular. The following scientific tasks had been completed to achieve the defined goal: analysis on the essence, specifics and commitments of the Fiscal Compact and the preconditions for its establishment; research on the accumulation of macroeconomic imbalances in the EU and the Euro area, the development of emerging crisis processes such as the global financial crisis, the Greek debt crisis and its spread across Euro area; analysis of the structure, parameters and trends in the development of the new framework of economic governance in the EU, as well as the new financial supervision architecture; study of the internal logic of the Fiscal compact and its impact on the member states, Bulgaria in particular. The book is divided into three chapters which reflect the main goals of the study. Authors conclude that the economic and monetary union in the EU is yet vulnerable and susceptible to external shocks. The fiscal measures incorporated under the Fiscal Compact are not a matter of concern for the Bulgarian national authorities initially. The study team notes later an erosion to the fiscal policy of the country - it is being challenged by budget deficits, decreasing fiscal reserves and a trend of growing government debts while the investment by local and foreign entities is declining simultaneously.