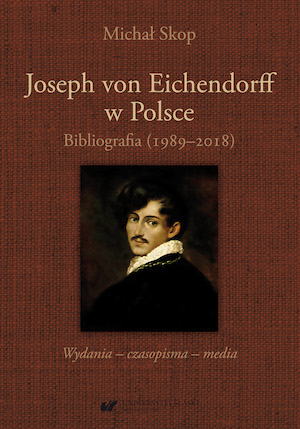 Author(s): Michał Franciszek Skop
Subject(s): Studies of Literature
Published by: Wydawnictwo Uniwersytetu Śląskiego
Keywords: Joseph von Eichendorff
Summary/Abstract: This bibliography devoted to Joseph von Eichendorff (born in Łubowice near Racibórz) concerns the publishing and media activity in Poland between 1989−2018. The presented listings include book publications, journals, doctoral dissertations, ephemeral publications, as well as films, theater plays, festivals and other media activities. The volume is concluded with an essay on the reception of von Eichendorff ’s works in Silesian press post-1989.The monograph attempts to map Joseph von Eichendorff ’s place in the consciousness of critics, translators, literary scholars, historians, historians of literature, cultural studies scholars, folk studies scholars and ethnologists on the basis of collected articles, notes and reports from the Polish press. An attentive reader will find among the listings the names of German scholars as well as translations of their articles into Polish, published in Polish journals or collected volumes.The aim of this monograph has been to study the range of reception of the works of “the last knight of German Romanticism” in the last three decades. The user of this bibliography will notice not only numerous translations of Joseph von Eichendorff ’s poetry, but also other accomplishments of the translators of his poetry and prose. The most extensive chapter concerns texts published in yearly, quarterly, monthly, bimonthly, fortnightly and weekly journals, social and cultural journals, scholarly and popular science journals, trade journals as well as local periodical press published by the local government offices and municipal offices, associations and societies, and German minority associations. The listings entail poems published in the Polish translations, as well as articles, notes and reviews devoted to the selected aspects of Joseph von Eichendorff ’s creative work, written in Polish and German, but also in English, or even in Latin or the Silesian dialect.