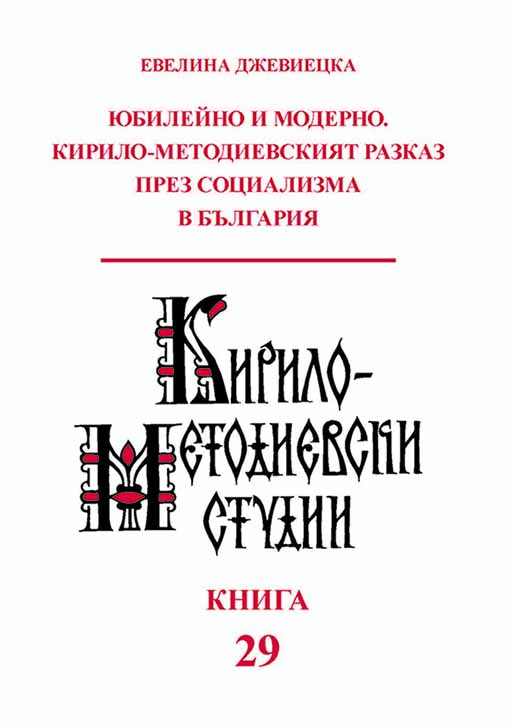 Author(s): Ewelina Drzewiecka
Subject(s): History, Language studies, Language and Literature Studies, Cultural history, Recent History (1900 till today), Post-War period (1950 - 1989)
ISSN: 0205-2253
Published by: Кирило-Методиевски научен център при Българска академия на науките
Keywords: Cyril and Methodius; narrative; Bulgaria; socialism; jubilee; cultural memory; modernity; nationalism; Communist discourse; secularization.
Summary/Abstract: The monograph is dedicated to the functioning of the (hi)story of St. Cyril and St. Methodius and their pupils during socialism in Bulgaria. It thus raises an issue that has not been the subject of a comprehensive study so far, although it seems very important not only from the point of view of Bulgarian national identity and problems of cultural heritage, but also in terms of ideological uses of memory, especially under the conditions of a totalitarian regime. The analytical focus is on various scientific and popular collective editions and literary texts that were published in the period 1944–1989 on the occasion of the Cyrillo-Methodian anniversaries: 100 years since the first celebration of the 11/24 May feast (1957), 1,100 years since the creation of the Slavic alphabet (1963), 1,100 years since the death of Constantine-Cyril the Philosopher (1969), 1,150 years since the birth of Constantine-Cyril the Philosopher (1977), 1,300 years since the foundation of the Bulgarian state (1983), and 1,100 years since the death of Methodius (1985). In the terminology of Jan Assmann, they are treated here as “formative texts”, i.e. as texts that answer the question “who are we?” by conveying knowledge that provides identity and motivates united actions through the telling of shared stories. The analysis of thematic emphases and trends, rhetorical techniques, and semantic shifts that manifest in the narrative is conducted in the context of the changing socio-political conditions of three micro-periods of Bulgarian socialism (the 1950s, 1960s and 1970s–1980s) that are marked by the three keywords ‘revolution’, ‘education’ and ‘culture’, and so the analysis is conducted in close connection to the Communist party discourse on the topic. In the perspective of the actualising and semiotising character of the commemorations of the (hi)story of the “Slavic/Bulgarian Enlighteners”, the most important questions are raised regarding the functioning of the Cyrillo-Methodian narrative during socialism in Bulgaria, the issue of cultural continuity and the role of the National Revival tradition in the interpretation of the case, the modern character of the language that was used by the elites at that time, the Enlightenment/modern sense of the Bulgarian interpretation of the case, as well as questions concerning “communist nationalism” and the secularization of the Church cult of the Slavic Saints in the context of “Orthodox modernity”. The monograph is an attempt to combine the following: the culturological interpretation of (quasi)literary texts with the history of historiography approach through the lens of the history of ideas; the interpretative perspective provided by the conceptual framework of cultural memory (in terms of Jan and Aleida Assmann); the idea of the thought-collective as a self-masking institution (in terms of Mary Douglas); post-secular thought.