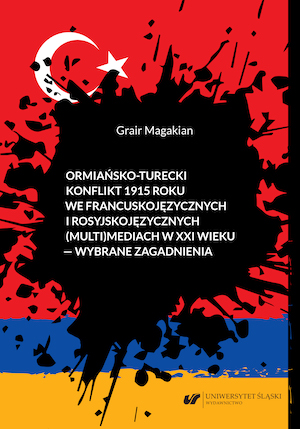 Author(s): Grair Magakian
Subject(s): Language studies, Communication studies
Published by: Wydawnictwo Uniwersytetu Śląskiego
Summary/Abstract: The monograph aims to discuss the Armenian-Turkish relations in the media discourse of the 21st century, predominantly on the basis of French and Russian-speaking mass media on the Internet, with particular emphasis on cognitive analysis of media materials and their influence on exacerbating or alleviating the Armenian-Turkish conflict.The Armenian-Turkish conflict, triggered by the Armenian genocide in the Ottoman Empire and lasting for more than 100 years, has been widely discussed in media coverage, including on the Internet. Most of the research material therefore comes mainly from the Internet and includes online editions of paper publications, including traditional periodicals, digitalized official publications, blogs, forums, and even Wikipedia. The choice of the research material is motivated by approaching the subject via the analysis of information transmitted in any direction, in any medium, and in any form to any recipient, because an undefined recipient (i.e. everyone) often seeks out and retains information without paying attention to its source.The above approach has also conditioned the research timeframe, which covers the first and partly the second decade of the 21st century (with the origins of the conflict in the beginning of the 20th century briefly sketched out for context). The choice of languages, on the other hand, was dictated both by the fact that the Russian and Frenchspeaking media practically “accompanied” this conflict from the first moment onward, as well as by the fact that the former reflects its Eastern and the latter its Western perception.The present study constitutes the first foray into the topic and is an essential part of understanding and improving the processes taking place in French and Russianspeaking media discourses, among other things: 1) critical analysis of the abovementioned discourses, 2) influence of the media on the processes occurring in the perception of discursive information at the level of consciousness and subconsciousness of the recipients, 3) attempts to distinguish discursive fact and falsehood from the perspective of cognitive analysis of discourse models, 4) the paradigm of truthfulness of discourse at the level of its compatibility with reality.The examples analyzed in the book in both languages are identical or at least relatively substantially similar, taking into account the perceptual characteristics of both French and Russian.The monograph presents the theoretical foundations of the research (in particular, the philosophical and socio-psychological framework), introduction to the theory of discourse (the social functions of language, the place of information in cultural and relation-forming discourse, the critical analysis of discourse, the directions of research and discourse analysis) and the channels of information flow, along with their cognitive analysis (issues related to, among other things, the specificity of the language of the media, the illocutionary structure of discourse, and the categorization of discourse are taken into account).A fundamental place in the study is occupied by the matter of the semantic structure of the so-called plexuses (as components of cognitive analysis), which, derived from K. Popper’s paradigm of worlds, create discursive space and space for empirical translation (or materialization) of discourse. In addition, the monograph covers issues related to the normative meaning of discourse in correlation with national ideology and the analysis of manipulative discourse tactics. It also presents the influence of socio-political and economic factors on the linguistic structure of discourse.Moreover, the research presented in the monograph includes the influence of the noun genocide (from Greek genos – genus, genealogy, origin, and Latin cide, from caedere – to kill, to massacre) on its subliminal reception by the participants of the discourse, as well as ethnocultural stereotypes and the specificity of the sociolinguistic analysis of the ideological propaganda war. It is worth noting that the social interaction of the understanding of genocide in Armenian-Turkish relations was also taken into account in the study.The conclusion is that the discourse includes a number of clearly separated semantic codes, which in this case can be divided into historical-patriotic, legal-judicial, religiousspiritual, visionary-analytical, economic, critical-oppositional, state and raison d’etat, civilizational-European vs. barbarian-Asian, and national superiority.