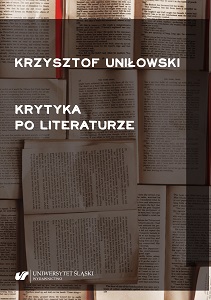 Author(s): Krzysztof Uniłowski
Subject(s): Language and Literature Studies, Literary Texts, Fiction, Studies of Literature, Novel, Polish Literature, Theory of Literature
Published by: Wydawnictwo Uniwersytetu Śląskiego
Keywords: Literature; criticism; history of literature; science fiction;post-secularism;
Summary/Abstract: Criticism After Literature constitutes the next stage of the critical project undertaken by Krzysztof Uniłowski over the decades. Criticism is understood here not only as a certain way of thinking, but also as a culturally creative practice. As such, it takes various discourses, including non-literary ones, and even itself, as its object of interest. In some chapters, the monograph undertakes theoretical considerations, while others are devoted to the interpretation of literary works.The monograph discusses the role of criticism at the beginning of the 21st century, where it finds itself in a new reality for literary communication (in the chapter “Criticism After Literature”). However, the considerations also tend towards metacritical reflection (“Hospitality of Criticism”), theoretical and literary reflection (“Textualism, Materialism, Immersion, Interpretation”) or post-secular reflection (“Don’t Touch Me…” and “The Defenders of Literature and Their (Cryptotheological) Fantasies”). Moreover, the author considers critical practices and their conditions (“The Avant-garde in the Television Era”).Part of the monograph is devoted to the interpretation of literary works. In the chapter “Hope from the Stars,” the author looks at the gnostic conditions of dystopia; in “History as Parody,” he touches upon the story of the Witcher by Andrzej Sapkowski; and in the chapter “Zły Zagłoba,” he delves into the relationship between Sienkiewicz’s character and Anna Brzezińska’s Mr. Krzeszcz.