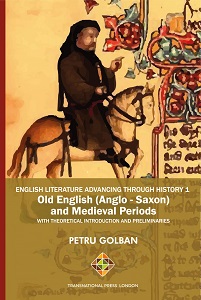 Author(s): Petru Golban
Subject(s): Language studies, Language and Literature Studies, Studies of Literature, Middle Ages, Historical Linguistics
Published by: Transnational Press London
Keywords: English Literature;Anglo-Saxon literature;Medieval literature;
Summary/Abstract: It appears that literary work possesses eternal temporal validity due to its autonomous aesthetic value, whereas criticism provides points of view having temporary and transitory significance. Despite such claims, the vector of methodology in our series of books, dealing with the history of English literature, relies on Viktor Shklovsky, T. S. Eliot, Mikhail Bakhtin, and especially Yuri Tynyanov, whose main reasoning would be that literature is a system of dominant, central and peripheral, marginalized elements – to us, “tradition” (centre) versus “innovation” (margin) engaged in a “battle” for supremacy, demarginalization, and the right to form a new literary system – and the development or historical advancement of literature is the substitution of systems. Roman Jakobson and French structuralism, on the whole, later Linda Hutcheon, with her “system” and “constant”, and Bran Nicol with the “dominant”, to say nothing about Itamar Even-Zohar and his theory of polysystem, to a certain extent Julia Kristeva, and even Homi Bhabha – as well as our humble contribution, by means of the books in the present series, we would like to believe – maintain Tynyanov’s line of thinking and concepts alive, which have developed and emerged nowadays more like a kind of “neo-formalism”. Contents | Preface | Introduction: Approaching Literary Practice and Studying British Literature in History | Preliminaries: Learning Literary Heritage through Critical Tradition or Back to Tynyanov | The Idea of Literature as a Critical Concern in Classical Times and in the Middle Ages | Old English (Anglo-Saxon) Literature | Old English (Anglo-Saxon) Poetry | Lyrical Poetry: Caedmon, Cynewulf, Anonymous Poems | Epic Poetry: Beowulf Within and Beyond a Great Tradition |Old English (Anglo-Saxon) Prose | The Venerable Bede and Alfred the Great | The Anglo-Saxon Chronicle and the Rise of a National Consciousness | Medieval LiteratureThe Anglo-Norman Literature | The Medieval Romance: Between Imitation and Originality | Geoffrey Chaucer and His Epoch | The Canterbury Tales: The Aesthetic Monument of Medieval Literature | The Fifteenth-Century Literature | English Drama in Its Incipient Stage | Conclusion: The Beginnings of British Literature | References and Suggestions for Further Reading | Index