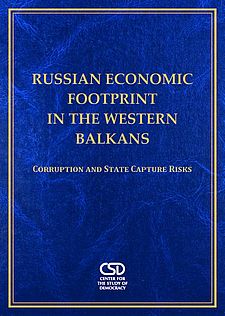 Author(s): Martin Vladimirov, Milica Kovačević, Marija Mirjačić, Igor Novaković, Nemanja Todorović Štiplija, Emina Nuredinoska, Slagjana Dimiškova
Subject(s): Politics / Political Sciences, Politics, Social Sciences, Economy, Supranational / Global Economy, Sociology, Economic policy, International relations/trade, Economic development, Sociology of Politics, Socio-Economic Research
Published by: Център за изследване на демокрацията
Keywords: Western Balkan; Russia; Serbia; Montenegro; Macedonia; Bosnia and Herzegovina; Kremlin Playbook; Russian economic footprint
Summary/Abstract: The Western Balkans have become one of the regions, in which Russia has increasingly sought to (re)assert its presence in the past decade. In attempt to improve the understanding of the impact of the interplay between existing governance gaps and the inflow of authoritarian capital in the region, the Center for the Study of Democracy developed an assessment of the Russian economic footprint in Serbia, Montenegro, Macedonia and Bosnia and Herzegovina. Although in absolute numbers Russian investment in the region has increased by more than EUR 3 billion, Russia’s economic footprint as share of the total economy in the Western Balkans has shrunk or stagnated in the wake international sanctions over the annexation of Crimea. Because Russian businesses are concentrated in a small number of strategic sectors however – such as banking, energy, metallurgy and real estate – the four small, energy-dependent countries assessed in this report remain vulnerable to Russian pressure. An overreliance on Russian imports, coupled with an expansion of Russian capital, has made the governments of the Western Balkans particularly susceptible to pressures on strategic decisions related not only to energy market diversification and liberalization, but also to Russian sanctions, and NATO and EU expansion.