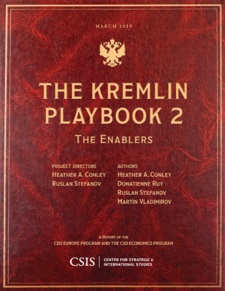 Author(s): Heather A. Conley, Donatienne Ruy, Ruslan Stefanov, Martin Vladimirov
Subject(s): Politics / Political Sciences, Politics, Social Sciences, Economy, Sociology, Economic policy, International relations/trade, Economic development, Sociology of Politics, Socio-Economic Research
Published by: Център за изследване на демокрацията
Keywords: Kremlin Playbook; Russia; Russian Influence in Europe; Europe; Austria; Italy; Netherlands; Czech Republic; Montenegro; Romania;
Summary/Abstract: In 2016, the major study The Kremlin Playbook: Understanding Russian Influence in Central and Eastern Europe concluded that the Kremlin has developed a pattern of malign economic influence in Europe through the cultivation of “an opaque network of patronage across the region that it uses to influence and direct decision-making.” This network of political and economic connections—an “unvirtuous” cycle of influence— thrives on corruption and the exploitation of governance gaps in key markets and institutions. Ultimately, the aim is to weaken and destroy democratic systems from within. Despite the varied nature of the countries presented in the first volume, the names of specific jurisdictions, companies, and members of Vladimir Putin’s inner circle kept appearing in nearly every network of influence. Was this a coincidence? Or could there be enabling forces that unwittingly or purposely amplify Russian malign economic influence? Exploring the answers to these questions formed the basis of our second report, The Kremlin Playbook 2: The Enablers. Enablers of Russian malign influence allow the Kremlin to achieve its end and avoid some of the consequences of its behavior. By aiding and abetting Russia’s malign influence, enablers assist the Kremlin in self-destructive behavior that siphons funds offshore (often in or through Europe) and depletes the Russian tax base at a time of dire economic conditions. Crucially, by allowing Russian economic influence to cycle through their systems, enablers actively participate in the weakening and discrediting of their own democratic structures. Understanding Russian malign economic influence requires understanding the risks inherent in large Russian investment flows. Because enablers can facilitate or aid illicit financial flows, they jeopardize the integrity of open market economies and, ultimately, create a threat to national security. State-owned enterprises and large companies play an important role in the furtherance of Russian malign economic influence because of their dominant position and ability to distort market competition. The significant amounts of financial flows they oversee make them susceptible to illicit practices or abuse. Enablers can facilitate the integration of illicit funds within legitimate global financial flows, assisted by shell companies and corporate facilitators like banks, attorneys, or accountants. Russian private holdings abroad total an estimated $1 trillion. These significant capital flows create a potential dependence on illicit funds in which the enabler and the Kremlin both benefit from and are dependent on a system that helps these flows transit in and out of Russia and Europe. Illicit finance, particularly money laundering, can damage national security by corrupting government officials who can alter policies, impeding the free flow of capital, reducing the efficacy of sanctions regimes, and distorting entire markets and industries. This link between illicit finance and national security can materialize in two separate channels—public corruption and organized crime—that follow the same track and at times overlap. In the case of Russia, these two flows converge at the behest of the Kremlin. Malign actors hiding funds and profits can do so through money laundering and tax avoidance or evasion. Enabling countries’ developed financial systems move these billions in investment and profits in and out of European countries every year. These financial systems offer specific tools that are designed to obscure the origins of certain investments and conceal illicit financing. Tactics that remove profits from the reach of tax authorities (and thus state revenue) may not be illegal, but some are meant to operate just below the threshold of illegality, where enablers excel—within a financial gray zone. They might be following the letter of the law, but certainly not its spirit, and industries like corporate service providers (CSPs) assist in this task by feeding the enabling ecosystem through complex, cross-border transactions and company constructions. This complex ecosystem has grown exponentially in the past three decades with rapid globalization and Russia’s deep integration within our financial system. It has become almost impossible to disentangle the reported $1 trillion of Russian capital outflows from other financial flows, including for the most capable oversight bodies in the world.