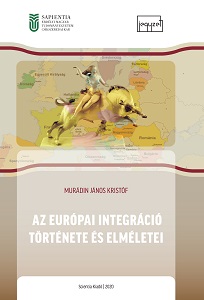 Author(s): János Kristóf Murádin
Subject(s): Politics / Political Sciences, Politics, Political Sciences, EU-Accession / EU-DEvelopment, Geopolitics
Published by: Scientia
Keywords: European integration; Paneuropa plan; Schuman Plan; European Economic Community; Treaty of Maastricht;
Summary/Abstract: This textbook is not merely a simple, chronological description of the history of European integration but much more: it offers a philosophical-ideological synthesis of the idea that stands at its foundation, that of the continental unification. Accordingly, its main goal is, on the one hand, to present the formation and historical changes of the idea of unified Europe and, on the other hand, to give an overview of the foundation and development of the European Union as we know it today. Following the preface, a brief introduction presents the geographic extensions of Europe and the origins of the name. The next chapters describe the formation and development of the unification idea as well as the process of European integration. First, the ancient conceptions of Europe are presented and then the attributes of the mediaeval Christian community, the first plans of unification in the age of the Renaissance and the continental peace programmes emerging in the Enlightenment era as well as the characteristics of the Europe conception in the 19th century. A full chapter is dedicated to the unification plans that emerged in the first part of the 20th century, such as the Paneuropa plan of Coudenhove-Kalergi, which are considered as direct sources of the European integration. The attempts of Nazi and fascist totalitarian regimes to build continental empires and, at the same time, the efforts of the resistance movements aiming at unification based on federalism are presented in another chapter. The eventful years of the period of post-war transition are detailed in yet another separate chapter. The process of European integration from the 1950 Schuman Plan to the foundation of the European Economic Community, and after that, the formation of the European Communities, the crisis of integration, and the first enlargement are laid out in the next chapters. The decade of Euroscepticism between 1973 and1984 is the topic of another chapter. The integration of Mediterranean countries and the new routes of European unity during the 1980s are analysed in the next part, followed by the presentation of the Treaty of Maastricht and the foundation of the European Union, together with the third wave of enlargement. A further chapter is dedicated to the institutional reform of the EU, presenting in detail the Treaties of Amsterdam, Nice, and Lisbon. Further on, the different phases of the Eastern enlargement come under scrutiny, while the last chapter is dedicated to the crisis of the EU in our days, with special attention to Brexit. The bookend with a synthesis of the European Union’s current situation from the global perspective, followed by the bibliography.