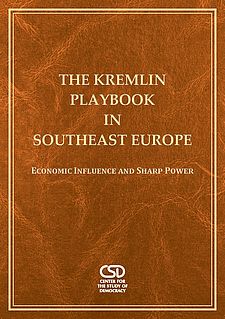 Author(s): Ruslan Stefanov, Martin Vladimirov
Subject(s): Politics / Political Sciences, Politics, Social Sciences, Economy, Supranational / Global Economy, Sociology, Economic policy, Economic development, Sociology of Politics, Socio-Economic Research
Published by: Център за изследване на демокрацията
Keywords: Kremlin Playbook; Russia; Southeast Europe; Economic Influence; Sharp Power; Albania; Bulgaria; Bosnia and Herzegovina; Croatia; Kosovo; Montenegro; North Macedonia; Serbia
Summary/Abstract: The weakening of the EU gravitational pull leaves a power vacuum in Southeast Europe that is readily filled in by authoritarian powers such as Russia. The Kremlin is taking advantage of the democratic backsliding and the widespread state capture among dysfunctional institutions to enhance its economic and political influence in the region. While Russian economic power in Southeast Europe has visibly declined since the imposition of EU and NATO sanctions on the Kremlin in 2014, its overall ability to influence domestic politics has remained potent and has even gained effectiveness. Russia has preserved its sway over strategic decision-making in the region most notably in the energy sector where it has locked governments in costly infrastructure projects. By exploiting governance deficits, the Russian economic footprint has expanded to include some of the biggest companies in the region in oil refining, wholesale fuel and natural gas distribution, telecommunications and retail. Their strategic importance for the national economies in Southeast Europe has provided Russia with an outsized political leverage. To amplify its influence, Russia has aptly employed a range of sharp power instruments such as media propaganda, leveraging cultural and religious ties and sponsoring of civil society activities. This report looks into the Kremlin playbook instruments in eight Southeast European countries: Albania, Bulgaria, Bosnia and Herzegovina, Croatia, Kosovo, Montenegro, North Macedonia and Serbia.