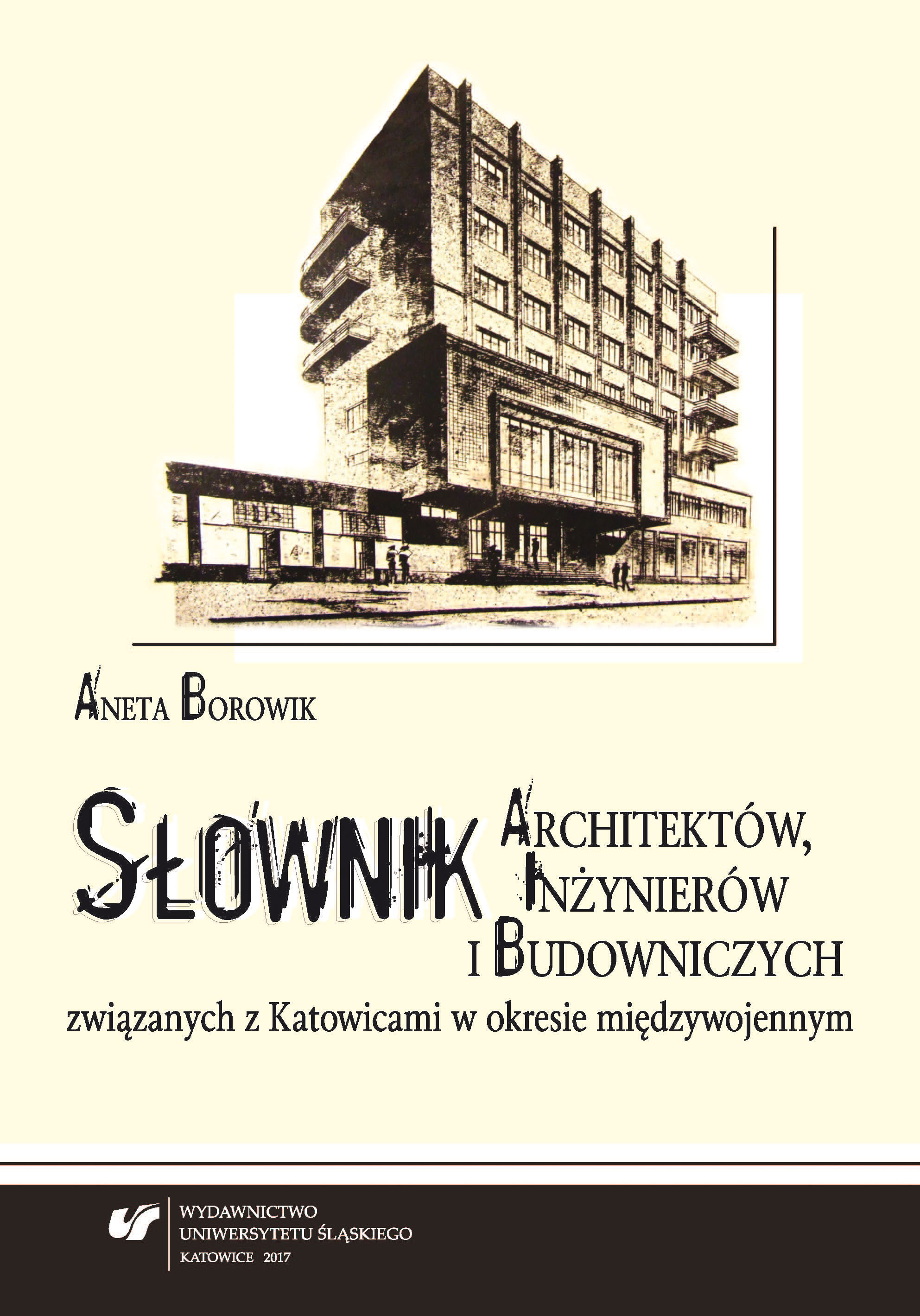 Author(s): Aneta Borowik
Subject(s): History, Fine Arts / Performing Arts, Cultural history, Architecture, Social history
Published by: Wydawnictwo Uniwersytetu Śląskiego
Summary/Abstract: The book consists of three parts. The introduction synthetically presents the environment being the subject-matter of this publication. The main part of the work is devoted to a dictionary alphabetically presenting profiles of an architecture-building staff of the town in the inter-war period. The appendices include selected biographies of the people in question. The biogram, apart from data concerning a professional path and personal life of selected authors, contains information on the author’s building realizations. The source basis constituted the literature of the subject and documents stored in The State Archive in Katowice and Archive of The Town Hall in Katowice. The biographical entries, wherever possible, included photographies of a given person and his/her selected realizations. The aim of the Dictionary was to present the profiles of architects, engineers and builders connected with Katowice in the inter-war period. It covered people who inscribed in a cultural and material picture of the town thanks to their presence or work achievements. Some of them, after arriving in Katowice in the 1920s, were connected with the town for ever. These were among others Tadeusz Michejda, Tadeusz Łobos, Lucjan Sikorski, Zbigniew Rzepecki, Leon Dietz d’Arma, Kazimierz Sołtykowski, Stanisław Gruszka, Stefan Kaufman, Witold Kłębkowski, Karol Schayer, Eugeniusz Pogoda, Henryk Schmidtke, Stanisław Tabeński, Karol Tchórzewski and Henryk Zawadowski. Others lived in Silesia only temporarily and contributed to a few or Just one realization. What has to be remarked on here is that the current state of research does not allow for ascribing a bigger importance to them. However, one can assume the research findings in the future will make it possible to present the total output of these authors too. They are Jan Bieńkowski, Eustachy Chmielewski, Witold Eyssmont, Odo Litawski, Józef Rybicki or Władysław Schwarcenberg-Czerny. The third group of workers was not connected with Silesia either because of work or living place. Their achievements in Katowice and nearby area allow for taking them into account in the Dictionary. Often, as was the case with edifices in Katowice such as a Voivodship Council and the Silesian Sejm, a cathedral, a covered market or a building of Silesian Technical Scientific Schools they were the milestones in the process of the architecture development of the town and region. To this group belong Kazimierz Wyczyński, Ludwik Wojtyczka, Stefan Żeleński, Piotr Jurkiewicz, Franciszek Mączyński, Zygmunt Gawlik, Franciszek Krzywda-Polkowski, Marian Lalewicz, Jadwiga Dobrzyńska, Zygmunt Łoboda, Wacław Nowakowski, Prot Komornicki, Stanisław Brukalski, Kazimierz Wędrowski, Alfred Wiedermann, Stefan Bryła, Adam Kuryłło. The least-known is the group of builders in Katowice in the inter-war period. Some of them continued their activity before 1922. These were among others Hugo Grünfeld, Karol Krompiec, Henryk Firla, Emanuel Witt, Józef Wuzik or Rudolf Fischer.The information collected in the dictionary should be an initiative for further and complex research on the environment of architects, engineers and builders in Silesia. Many of the authors under examination deserve a monographic work.