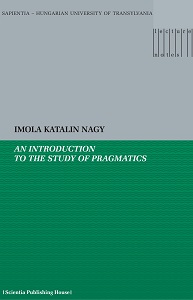 Author(s): Imola Katalin Nagy
Subject(s): Pragmatics
Published by: Scientia
Keywords: pragmatics; speech act theory; Grice’s theory of implicature; politeness theory; co-text and context; conversation analysis;
Summary/Abstract: An Introduction to the Study of Pragmatics introduces some important concepts in the field of Linguistics, more specifically in the branch known as Pragmatics. The author’s inquiry is a cross-disciplinary one, bearing in mind that a functional approach to language as it occurs, in any form or context, goes through and beyond the speech act. Language may be written or spoken, monological or dialogical, and it always has a communicative aim or purpose. The chapters in the book are grouped according to the theme tackled, starting from issues such as deixis, speech acts and arriving to implicit meaning. Language use contributes to the generation of meaning in many ways and the author’s approach to Pragmatics has included the macropragmatic view of context. The term ‘context’ seems to describe an unclear notion and the author attempts to clarify this concept by giving examples applicable to various European languages. Language use is closely related to social behaviour, as people exchange information to socialize, for various purposes, such as negotiating a contract or finding a solution to a problem. The author defines Pragmatics as a „collection of theories and ideas” and while defining the scope of Pragmatics she discusses definitions given by the sociolinguist Dell Hymes, who puts forward an account of the factors that must be taken into consideration when trying to describe what happens when people use language: where the exchange takes place – the setting refers to the concrete physical circumstance in which communication takes place, e.g. course rooms, meeting friends, etc. The scene refers to psychological and cultural circumstances of the speech situation, e.g. inviting, advising, pleading, and conferring. Then, the participants may be of various kinds and may be referred to as Speaker, Hearer and Audience, or Addressor, Addressee. Ends are the conventionally recognised and expected outcome of an exchange, as well as personal goals that each of the participants tries to accomplish. Keys refer to the tone, manner in which a particular message is conveyed. The choice of channel, norms of interpretation, and norms of interaction, followed by the genre that has to be recognised are mentioned. The book is structured in eight chapters, beginning with a list of key concepts that will be explained in the course of the given chapter. They are entitled as follows:1. Introduction to pragmatics; 2. Micropragmatics; 3. Speech Act Theory; 4. Grice’s theory of implicature; 5. Macropragmatics. Issues of co-text and context; 6. Politeness theory; 7. Conversation analysis; 8. Pragmatics and translation studies. The use of descriptive language and practical samples of discourse greatly simplifies understanding of key terms and concepts, such as code, message, meaning relations, felicity conditions. The problem of deixis is thoroughly analysed over approximately 20 pages in Chapter 2. Levinson, Allot and Mey are a few of the scholars quoted by the author to describe and define the approaches to deixis (philosophical, descriptive). Indexicals, space and time deixis, social deixis are richly exemplified. Presuppositions (existential, factive, non-factive, lexical, factual, counterfactual) and entailments are then presented, drawing on Yule and Levinson. The 25 pages of Chapter 3 are dedicated to Speech Acts. Austin, Searle, Mey, Levinson, Coposescu are but a few of the theoreticians concerned with a “careful elucidation of some of the2concepts of ordinary language”. As the author points out, Searle (1969) identified five illocutionary/perlocutionary points. Assertives are statements may be judged true or false (they aim to describe a state of affairs in the world). Directives are described as statements that attempt to make the other person's actions fit the propositional content. Commissives are statements which commit the speaker to a course of action as described by the propositional content. Expressives circumscribe the “sincerity condition of the speech act” and declaratives attempt to change the world by “representing it as having been changed”. Grice, Russell and Yule are also quoted in an attempt to clarify the scope and meaning of felicity conditions, followed by Austin’s Speech Act Theory and a brief explanation of speech events. Chapter 4 moves on towards Grice’s theory of implicature, presenting issues such as the cooperative principle, Grice’s maxims (quantity, quality, relation, manner), hedges, flouting the maxims and generating implicature, suspending the maxims, etc in nearly 20 pages. The cooperative principle is explained using models of understanding language and models of communication and the wealth of examples facilitate an easy intake by students. Co-text and context are dealt with in the subsequent 10 pages (Chapter 5), which include issues pertaining to conversation analysis, social contexts and approaches to the description of context (ethnographic vs. pragmatic).Chapter 6 spans over 25 pages to describe politeness and politeness strategies, as well as Leech’s maxims (tact, generosity, modesty, etc).The focus shifts in Chapter 7 onto conversation analysis and some of the modern approaches and methodologies since the 1960s. In a little less than 10 pages students are acquainted with naturally occurring conversation analysis, the interactional nature of social communication as well as turn taking models. Chapter 8 contains a summary of specific issues of Pragmatics arising in the work of a translator. Translation problems of localization, communicative translation and semantics are briefly presented, including some issues relating to the functions of language that need to be considered when rendering meanings in translation. A list of key terms and concepts as presented in the previous chapters could be useful to the student.