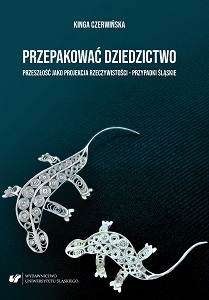 Author(s): Kinga Czerwińska
Subject(s): History, Social Sciences, Sociology, Social history
Published by: Wydawnictwo Uniwersytetu Śląskiego
Keywords: heritage; radition and identity; cultural tourism;Upper Silesia;
Summary/Abstract: Heritage is currently one of the most exploited terms in the discourse upon the relationships between the past and the present. What is the consequence of the widespread use of this term is the fact that the semantic content of the term is a complex, multi-layered construction. In its extent, heritage includes a collection of cultural resources wherein the differences between high culture and popular culture are bridged, whereas its depositaries, according to the needs of the moment, choose those of its layers that have the capability for satisfying their emerging expectations. Heritage may be talked about in the following categories: value, weight or commodity, while each of these images evokes different attitudes towards the existing reality – an attempt to preserve it, an escape to modernity, or consumerism focused on here and now. The selection process, and thus the selection of heritage resources, is extremely dynamic and difficult to predict, since it expresses the relationship of generations to the previous generations and to what they had developed. The relationship, in turn, depends on many factors that clash with each other because of the influence of the factors determining the contemporary world, such as: globalism, consumerism or technocracy. This work is a problem monograph in which I have made an attempt to address the issue of cultural heritage and its functioning in the process of transformations that Poland has been experiencing after 1989. Maybe it is not a monograph in the traditional sense, but it is a coherent whole that is cemented by the desire to find the mechanisms of the functioning of cultural heritage in contemporary everyday life. Particular chapters have been devoted to the analysis of the forms and content of the activities in the field of cultural animation, design and tourism, wherein the material and intangible cultural heritage of Upper Silesia constitutes the axis. The examples conducive to deliberating on the contemporary role of the resources of the achievements of the past generations are related to activities concerning the ways of participating in culture, which are based on the cultural heritage rooted in the region (such as folk outfit), but also on the heritage that have been mediated from culturally different environments, and that is only just becoming Silesian.The analysis of social practices is a starting point for initiating further considerations regarding the roles of the undertaken actions in shaping the identity, in satisfying the need for the identification with the given cultural landscape, or with emotions that are evoked by the activities and that accompany the participants and authors of these activities.This is a theoretical and empirical study, wherein Upper Silesia – a heterogeneous, diverse and contrasting terrain, constitutes the area of research exploration. Here, cultural heritage is continuously one of the most vital emblems of identity for the residents of both urban and industrial areas, as well as of villages located around post-industrial centres and those settled in the Silesian Beskid. This fact is also of great importance for the character of Upper Silesia, which has been formed as a socio-cultural borderland. The merger of various, often ethnically and culturally diverse elements, which is taking place within the borderland, determines the process of building the individual and collective identity and influences the perception of the past and the future of the region. The empirical material and its interpretation refer to the specific places and contexts of Upper Silesia, however I have attempted to present the illustrated here phenomena within the framework of a broader theoretical discourse on the role of tradition / cultural heritage in modern times.This work is the first study of the type that presents the material and intangible cultural heritage of Upper Silesia. It is comprised in a broad perspective that consists of the presentation of numerous examples of social practices, enriched by anthropological analysis. In my opinion, this procedure has enabled revealing the complexity of the relationships between the past and the present and their strong impact on the creation of the contemporary Silesian cultural landscape.

"Ładne to miasto jest!" Prolegomena do badań nad estetyką miasta "This city is nice". A prolegomena to studies on the aesthetics of the city 2010 Pracownicy Instytutu Etnologii i Antropologii Kulturowej Uniwersytetu Śląskiego - biogramy Employees of the Institute of Ethnology and Cultural Anthropology at the University of Silesia – biographical notes 2011 Problematyka sztuki ludowej w etnologii pogranicza The issue of folk art in the ethnology of the borderland 2011 Dydaktyka studiów etnologicznych wobec potrzeb rynku pracy. Przykład ośrodka cieszyńskiego Didactics of ethnological studies against the needs of job market. The example of Cieszyn centre 2011 Konwencja o ochronie niematerialnego dziedzictwa kulturowego UNESCO w perspektywie dyskursu antropologicznego UNESCO Convention for the Safeguarding of the Intangible Cultural Heritage from the perspective of an anthropological discourse 2012
2022 © CEEOL. ALL Rights Reserved. Privacy Policy | Terms & Conditions of use
ICB - InterConsult Bulgaria core ver.2.0.1201