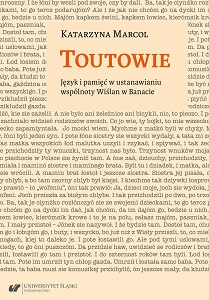 Author(s): Katarzyna Marcol
Subject(s): Anthropology, Social Sciences, Geography, Regional studies
Published by: Wydawnictwo Uniwersytetu Śląskiego
Keywords: the Touts; Vistulan community;Banat;
Summary/Abstract: The monograph is devoted to the issue of collective memory of an ethnic minority living in the Ostojićevo village in the Serbian Banat, whose roots trace back to the town of Wisła, located in the Cieszyn County. The members of this community are the descendants of 19th-century labor migrants who mined and brewed saltpeter for the purposes of the Austrian army, moving within the borders of one country from the Austrian Silesia to the southern reaches of the Habsburg dominion. With time, Evangelical saltpeter brewers started to settle in Banat, where the local Hungarian community named the newcomers the Touts, a moniker which comes from the word Tōth, used to denote settlers from Slovakia. It is estimated that currently, the size of this community oscillates between 120 and 150 people.The publication aligns itself with research on the relationship between language, culture and society, underscoring the determining role of language in one’s perception of the world, interpretation of social and cultural phenomena as well as its function in consolidating communities. Linguistics of memory, adopted as the research perspective, aims to showcase the interdependence between language as a medium of memory as well as a means of its preservation, and between the culture of a particular language community and its discourses (including the discourses of memory) that shape collective identification. The monograph shows — in the context of the transformations in the Tout collective memory — the way in which the language code influences the shape of that memory, as well as the way in which language, as a memory-shaping tool, can also serve as a tool of shedding inherited trauma, which, in turn, results in a transformation of the group’s identity. Due to the numerous factors that influence language as a tool in the process of shaping the collective memory of the community, which, as a result, influences the way the members of that community identify, the analysis has been conducted within a very precisely defined social context, taking into account historical determinants that constitute the foundation of the current social and political situation of the Tout community, as well as the inter-ethnic relationships in the local community.To provide a background for the analysis of the social memory of the Touts, the monograph describes the linguistic and cultural conditions of the multiethnic community of Ostojićevo. It discusses the linguistic competence of the minority group, taking into account their social arrangement, which includes different spheres of life: the Vistula dialect is characteristic of the sphere of family life; Slovak is the domain of the religious sphere; Hungarian is used in contact with neighbors and colleagues; Serbian is the official language of education and media, while Polish is used when interacting with the citizens of Poland as well as the officials at the Polish Embassy in Belgrade. The description of cultural practices (on the example of wedding customs) as well as inter-ethnic relationships in the rural society, on the other hand, unveils the dynamics of the transformation of objective markers of identity and the functioning of cultural patterns in specific instances of contact with others, which result in partial assimilation of the Tout community with the majority groups. The description of the communicative memory of the Touts, passed down in narratives of the past from generation to generation constitutes a major part of the monograph. It discusses stories of the ancestors, recorded during ethnographic field research, which — next to denomination and language — shape the Tout community. Intergenerational transfer, which solidifies the ethos of the Tout Evangelicals, allows them to participate in the collective knowledge and memory, which constitute the foundation of constructing the awareness of collective belonging. Moreover, the monograph describes the process of folklorization of remembrance stories, which has emerged as a result of conventionalization and objectivization of intergenerational transfer.The current transformations of communicative memory into cultural memory result in changes in the ethnic identity of the Ostojićevo Vistulans from local to national—Polish. The internalization of a new collective memory based on the Polish national symbolic universe is the result of actions on the part of various institutions of power, understood as various institutions of public life. As a result, new ways of affirming the Polish national identity appear, including linguistic tools (poems and songs in Polish) and creating new places of memory (Polish House) or introducing ways to differentiate between us and them (costumes for Polish folk music groups). The monograph is supplemented by an analysis of the rhetoric of memory in media messages, including Serbian television and documentaries, which, as multimedia texts of culture, emerge as carriers of memory, playing a large role in the shaping of collective identity.Memory, which reveals itself in narratives and discourses about the past as one of the ways to categorize the world (owing to the collectively sanctioned selection of what should be remembered and what should be forgotten), constitutes the basis of inculturation and identity creation among the members of a community. It should be noted, moreover, that the further we reach with our memory, the more difficult it becomes to verify the memories against reality, and the easier it become to notice the influence of language and culture on the picture it paints. The observation of the transitional stage between communicative memory and cultural memory, which can be currently witnessed in the Ostojićevo Vistulan community allows us to witness the role of language (understood in the broader communicative and cultural context) in transformation of memory and the following changes in identification.