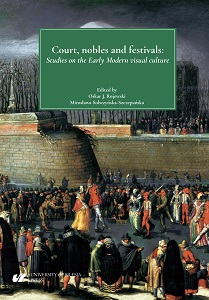 Contributor(s): Oskar Jacek Rojewski (Editor), Mirosława Sobczyńska-Szczepańska (Editor)
Subject(s): Cultural history, Visual Arts, Social history
Published by: Wydawnictwo Uniwersytetu Śląskiego
Keywords: Early Modern visual culture
Summary/Abstract: Public festivities, related strictly to the feudal political system, were a manifestation of power and wealth, of both the monarchs and the noblemen. To add splendor to ceremonial entrances of kings, weddings, or funerals of high-ranking persons, magnificent decorations had been prepared, often by eminent artists. Due to their ephemeral nature, only a few of them remained until the present time, yet thanks to detailed accounts and iconographic sources, such as designs and graphic renditions, their forms and complex ideological content may be the subject of scientific research.The book you have in your hands focuses on the issue of artistic setting of court ceremonies in the modern era, and are the result of cooperation between historians of art from the Jaume I University in Castellón de la Plana, the University of Valencia, Spain, and the University of Silesia in Katowice, Poland, which was established in 2016. The Spanish contributors belong to the group having the name ”Iconografía e Historia del Arte”, which have been conducting research on court culture and sponsoring of art for over twenty years. The initiative of publishing a joint monograph, undertaken by the Institute of Arts Studies of the University of Silesia, is a sign of ever increasing interest of Polish scientists in the issues referred to above. The book is devoted to selected aspects of the royal and noble visual culture, strongly related to the image of power. The first chapter, The festival books and the Habsburg empire: power and performance, by Víctor Mínguez, deals with the relevance of literary and visual sources as a testimony of the Habsburg court´s celebrations and explains their process of evolution in the 16th and 17th century. (part of the introduction)

The festival books and the Habsburg Empire: power and performance

Palermo: a Baroque capital of kings

Festive courts in the New World: the political journey of Luis de Velasco y Castilla in the American viceroyalties

“Con dos infantes colma la real cuna”. The festivals for twin grandchildren of Charles III and for the British peace in 1784