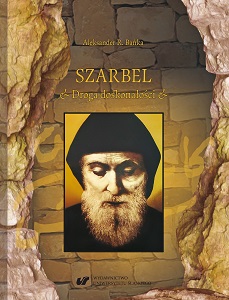 Author(s): Aleksander R. Bańka
Subject(s): Christian Theology and Religion, Philosophy, Metaphysics, Special Branches of Philosophy, Theology and Religion
Published by: Wydawnictwo Uniwersytetu Śląskiego
Keywords: eremitism; asceticism; Maronites; spirituality; hermitage;monasticism;
Summary/Abstract: Charbel: The Road to Perfection is the first Polish-language monograph on the life and spirituality of Charbel Makhlouf, a Lebanese monk and eremite, who is regarded as the most important modern continuator of early Christian ascetic philosophy. It is a study of his life, the most significant threads of his spirituality, and the philosophical foundations of his asceticism. The volume consists of three chapters, a preface, an introduction, concluding remarks, bibliography, and a personal index. Chapter 1 opens with a presentation of the broader context of Charbel Makhlouf ’s life. It outlines the short history of the Maronite Church, of which Charbel was a member, and the history of the Maronites, beginning with the early stage when the community was forming, until the turmoil of war, which cast a shadow over the early period of his life. This broader context makes it possible to carry out a detailed analysis of facts that comprise this part of Charbel’s life (before he entered the novitiate in Mayfouq) and to propose a chronological and factographic reconstruction of his childhood, which is the main task of Chapter 1. The motivation for this approach comes from the fact that the first period of Charbel’s life is poorly documented, giving rise to many conjectures and speculations that need verification. Both contexts — the historical background and Charbel’s childhood and youth — are presented in the first chapter of this volume as a unique substratum for his developing monastic vocation and his future ascetic practice. Although Charbel’s spirituality was a continuation of the main ideas of the ascetic practice of the Egyptian desert fathers and early Christian Syrian ascetics, at the end of the 19th century, this Lebanese eremite was able to shape it in a way that was novel and unprecedented in the modern understanding of the past Christian ascetic tradition. Thus, apart from providing a detailed analysis of facts that comprise the second period of Charbel’s life (before he became an eremite), Chapter 2 of this volume attempts to present the evolution of the main elements of his spirituality, in particular, of the fundamental aspects of the so-called philosophy without philosophy (the way of working and praying, faithfulness to the rule, the idea of monastic obedience, and the devotion to liturgy). The last period of Charbel Makhlouf ’s life comprises almost 24 years spent in the hermitage in Annaya. It is during that time that the unique elements of Charbel’s eremite life became recognisable and that the strong impact his attitude had on society became visible. This influence, which intensified following his death and triggered many socio-cultural transformations both in Lebanon and in other parts of the Middle East, stems from an extremely radical interpretation and practice of the profoundest ascetic ideals of the Christian tradition. Chapter 3 attempts to demonstrate how these ideals manifested themselves in Charbel’s mature years and in what way they were transposed to his contemporaneous cultural context. For this reason, the analysis presented in Chapter 3 is not limited to historical findings related to the final period of Charbel’s life (establishing facts and verification of biographic data up to the time of his death in the Annaya hermitage) but also aims to reconstruct a complete picture of his spirituality. The volume ends with extensive concluding remarks, which systematically and succinctly present the effects of Charbel’s life, his influence on the shape of Middle East Christianity, and the development of his cult in the modern Catholic Church. This monograph is addressed not only to researchers and students but also to readers who, through the prism of Charbel’s life, wish to gain more insight into Christian eremitism and Christian spirituality in the Middle East and, above all, to discover the modern face of early Christian ascetic philosophy.