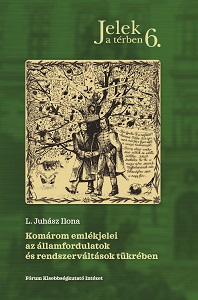 Author(s): Ilona, L. Juhász
Subject(s): History, Anthropology, Social Sciences, Ethnohistory, Cultural Anthropology / Ethnology
Published by: Fórum Kisebbségkutató Intézet
Keywords: Memorials;political turns;sculptures;monuments;memory culture;
Summary/Abstract: This book introduces memorials erected from the beginning to the present in the Slovakian part of Komárom (Komárno), situated on the left side of the Danube river. As the town changed hands several times during the 20th century, various political turns and ideological changes also affected memorials, in the sense that, upon the turns, new monuments were put up, the ones erected in the previous era were removed, and those removed were re-established again. The currently existing memorials are located in different places, some in a public space, some in a closed place (yard, garden, various buildings, etc.). In addition to the objects we can find in the town today, the book enumerates those that no longer exist or those having been planned but never completed. The memorials related to Judaism are discussed in a separate chapter. The volume includes a repository of memorials, as well as a rich appendix of newspaper articles related to some of the objects, occasionally showing the process of their establishment from idea to realization, and, many times, their removal and restoration. The appendix also contains ceremonial speeches given during inaugurations of the memorials and later commemorations of events they are linked to. These speeches reflect political turns and ideological changes the most. Many important events and constitutional changes related to the town can be traced through the history of memorials inaugurated in Komárom. Through their story, it is possible to recall the history of the town, as well as the decisive events concerning the fate of the Hungarians in Slovakia. The second volume of the book is currently under preparation, it will contain a repository of the memorials in the Hungarian (southern) part of Komárom, situated on the right bank of the Danube. The theoretical section will concern both volumes, and it will also include an analysis of the rites, celebrations, speeches, occasional poems, etc. related to each object.