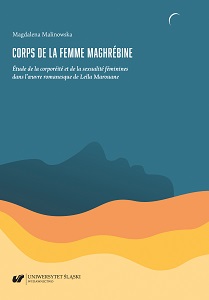 Author(s): Magdalena Malinowska
Subject(s): Studies of Literature
Published by: Wydawnictwo Uniwersytetu Śląskiego
Keywords: Body of The Maghrebian Woman; female corporality; sexuality; Leïla Marouane
Summary/Abstract: The aim of this monograph is to show multitudinous and variegated depictions of the female body in novels by a contemporary Algerian author, Leïla Marouane. Throughout the entire colonial period, the female body, having been considered a symbol of Algerian nationality, was turned into a token in a political struggle sustaining between the colonizer and Algerians. Thereby, women faced double oppression. The foregoing thesis serves as a departure point for the analyses carried out herein, which are focused on the way the contemporary woman of the Maghreb positions herself in relation to her double cultural heritage, while at the very core of the monograph’s discussion remain the issues of women’s corporeality and sexuality.Part One of the work, which is devoted to socio-political history of Algeria and the history of literature written by the women of the Maghreb, introduces readers to the said cultural circle. What is utilised here is Pierre Bourdieu’s field theory. Thus, both the Algerian field of power and field of literature undergo an analysis. In Chapter 1 an outline is provided of the history of Algeria; from the moment of regaining independence, through the civil war of the 1990s, up to the present day. Drawing upon the conviction espoused by the western second- wave feminists that history is always narrated from a subjective standpoint, the latter part of the chapter narrates the very same story from the women’s perspective, particularly including such aspects as their legal circumstances and transformations of the traditional family model.The subsequent chapter is devoted to the Maghreb field of literature or, to be more precise, its part created by women. First, some major theories of women’s writing are discussed (Hélène Cixous, Béatrice Didier, Françoise Théoret and others). After the said theoretical introduction, the origins and development of the Maghreb women’s literature sub-field are given account of, along with the catalogue of the most prominent female writers coming from three countries of North Africa. Finally, the question of bodily experience in selected works is tentatively discussed, thereby outlining the problematics of corporeality and sexuality in the literature of the studied cultural circle. In addition, it allows to better understand the specificity of Maghreb literature, while showing its opulence and variety, along with positioning the oeuvre of the author in question amongst other female writers of North Africa.Part Two of the monograph zeroes in on Leïla Marouane and her novels, in particular the issues of literary representation of female corporeality and sexuality. It commences with discussing her biography, a life journey which explains her involvement in feminist movement, finding its expression in both, her artistic works and extra-literary activism. Further on, all of Marouane’s five novels are discussed: La Fille de la Casbah (1996), Ravisseur (1998), Le Châtiment des hypocrites (2001), La Jeune Fille et la Mère (2005), and La Vie sexuelle d’un islamiste à Paris (2007). Chapter 4 begins with a presentation of the concept of sexuality in Islam. Then, different facets of female corporeality and sexuality in Marouane’s novels are subjected to an analysis, mainly such notions as: the traditional division of space into male and female, and the related (non-)presence of women in public space; the Muslim injunction of wearing so-called veil (hijab) and emancipation through “‘unveiling’ the body” (corps « dé-voilé »); the institution of marriage in Islam and the virginity taboo; the woman’s most important social function, namely, maternity, along with social control of sexuality and reproduction; objectification of female body as the aim of male desire and violence; and finally, budding female sexuality, the discovery thereof with resultant social ramifications. In the process of investigating the above-mentioned aspects of female corporeality and sexuality in the Maghreb culture, the stances of the following scholars prove to be instrumental: Fatima Mernissi, Abdelwahab Bouhdiba, Malek Chebel, Isabelle Charpentier and others.Leïla Marouane appears as one of the champions of the women’s cause in Algeria. Her feminist involvement facilitates and invites the reading of her oeuvre as a kind of database regarding today’s Algerian society, in particular the position held by women. The analyses conducted herein prove the paramount aim of her works, that is, to expose the male dominance and, in turn, the oppression incurred by Maghreb women. However, it seems worth underscoring that Marouane does not point to Islam per se as a source of the said situation, but rather indicates fossilised and antiquated traditions which prevent women from truly partaking in the achievements of modernity. In her literary pieces, the author in question juxtaposes two generations: that of mothers who are the guardians of mentioned traditions, in their forties or older, illiterate, having been married to their husbands in an early age, confined to their homes, socially and financially dependent on their men; and that of daughters – younger women, educated, in employment, remaining unmarried well into adulthood, and enjoying relative freedom. This contrasted picture of different generations of women reflects real changes observed by sociologists in Algeria and other countries of the region. Therefore, literature in general, and works by Leïla Marouane in particular, become tell-tale indicators of transformations taking place in the society.