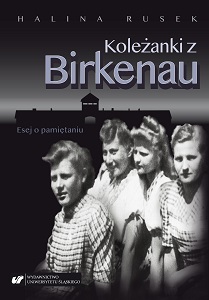 Author(s): Halina Rusek
Subject(s): History, Jewish studies, Special Historiographies:, Fascism, Nazism and WW II, History of the Holocaust, History of Antisemitism
Published by: Wydawnictwo Uniwersytetu Śląskiego
Keywords: Nazi concentration camp; autobiography; memory; freedom
Summary/Abstract: The friends from the title of this book are a group of female prisoners of KL Auschwitz-Birkenau (1943–1945), whose paths crossed several times during around two years of camp life in Birkenau. At different times they lived in one block of the women’s camp, slept in one bunk, together left Auschwitz to work in the Wolkenburg camp, and several of them escaped together from transport to Dachau, from a freight wagon, at the small German station of Weiden. Together they also survived one of the most beautiful, as they say, periods in their lives – a few months of miraculously regained freedom, spent in Weiden under the protection of the American army. Several of them also took a long, difficult journey home. Preserved memories of three of these friends – including the Mother of the book’s author, are the central axis of this essay. It presents the process of shaping the way of perceiving the world and the identity of individuals who came across actions aimed to annihilate human beings. They came into contact with the essence of a concentration camp, which was based on depriving people of all rights and even exterminating them. The approach chosen by the author is the biographical method which focuses on the study of what is individual, related to assessments, values, experiences. It is a book about trying to find an answer to the question of how it happened that some people expressed indescribable cruelty to other people and decided to dehumanize and annihilate them. The book is also about the forces you must find in yourself in order to survive such an experience and start living an ordinary life afterwards. The author’s intention is to bring the recorded memories of the Friends to a possibly wide audience, to the public sphere and also, or perhaps above all, to the consciousness of those whose way of thinking is far from scientific.