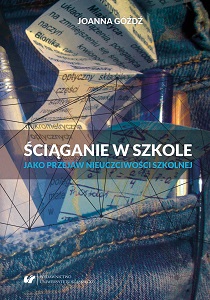 Author(s): Joanna Gwóźdź
Subject(s): Social Sciences, Education, School education, Sociology of Education
Published by: Wydawnictwo Uniwersytetu Śląskiego
Keywords: cheat sheets; motivation to learn; control; supporting autonomy; cooperation and support; competition; risk; morality;neutralization;
Summary/Abstract: The aim of the present work was to present the problems associated with using cheat sheets in post-gimnazjum schools within a theoretical framework and on the basis of the results of research which has been heretofore conducted in this field. Moreover, the results of the research conducted by the author was presented.The work consists of two fundamental parts. The first part contains a theoretical introduction to the understanding of the phenomenon of using cheat sheets at school and the determinatives thereof. This part constitutes the basis for the results of the author’ personal research, conducted and discussed in the further part of the book. The first subchapter presents the school as the basic environment of the psychosocial development of the pupil and discusses the basic theories of motivation in education with special reference to the concept of the Self-Determination Theory, as well as the role of perception-related factors in the context of the behaviour of teachers, parents and the relations in the class.The second subchapter presents the school as the area of acquiring extranormative behaviour; it discusses the selected theories of deviation in reference to the phenomenon of using cheat sheets, including the theory of neutralisation. The second subchapter discusses the theoretical bases of the problem of cribbing, its origins and the motivation to crib among pupils. These aspects were related to the category of risk and of moral development. The second part presents the methodological concepts of the research which was conducted. The aim and the object of research, the problems and hypotheses, the methods of research, the selection of the research sample and the area of research were described in detail. The variables which were taken into account in the research and the detailed operationalisation of these variables in the form of a presentation of the tools which were constructed for the purposes of research were described. Moreover, the methods of the statistical analysis of the research were presented.The third part of the work constitutes a description of the results of research which was conducted. This part was divided into three subchapters. The first subchapter constitutes an attempt at describing and systematising the phenomenon of cribbing and the associated experiences in the perception of pupils. Here the opinions and declarations of pupils concerning the diffusion of the phenomenon and the ways and means of cribbing, the justifying and repelling motivation to crib or not to crib as well as the consequences of cribbing. Moreover, the problems of providing assistance in cribbing and the behaviour and emotions of pupils which appear in the situation of “extorting assistance” as well as the attitudes toward “squealing” are presented. Additionally, the experiences of pupils associated with items in the school reading lists and doing homework as elements of scholastic fraud as well as the voluntary remarks of pupils about the phenomenon of cribbing itself are presented. The second subchapter presents the problems of the mediatory role of motivation to study in the concept of the Self-Determination Theory (in the following planes: amotivation, external motivation, introjected motivation, motivation based on identification and internal motivation) in the relations between: the perception of the behaviour of parents and teachers (construed in two dimensions: control and fostering autonomy) and the perception of the relations in the class – competition as well as collaboration and support between pupils and cribbing which involves three factors: causative cribbing, being an accessory to cribbing and reluctance to provide assistance. The third subchapter constitutes a description of the results of a quasi-experiment involving the influence of the magnitude of risk, the appearance of the factor which neutralises norms, the purpose of cribbing, the proclivity to observe norms and the proclivity to break them to the proclivity to cribbing.The work features a conclusion, a general reflection upon the phenomenon of cribbing andthe interpretation of the results of research which were acquired in the context of their significanceto educational practice.