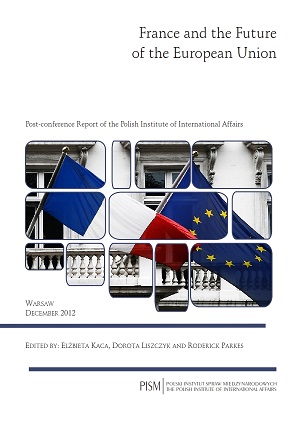 Contributor(s): Elżbieta Kaca (Editor), Dorota Liszczyk (Editor), Roderick Parkes (Editor), Brien Barnett (Editor), Dorota Dołęgowska (Editor)
Subject(s): National Economy, Supranational / Global Economy, Governance, Economic policy, International relations/trade, Security and defense, Economic development, Geopolitics
Published by: Polski Instytut Spraw Międzynarodowych
Keywords: European Union; France; EU issues; economic growth; EU policy; French economy; international relations; geopolitics; Eurozone; Economic and Monetary Union; security policy;
Summary/Abstract: At the EU level, President Hollande is attempting to distance himself from his predecessor by putting emphasis on growth measures, as a supplement to the austerity policies opposed by some southern European states, and by opening up the Franco-German tandem to new players, notably the southern members but also those to the east. Franco-German disagreements concerning current EU issues, notably the scope of the banking union and the solidarity agenda towards the south, are negotiable. In relation to the future of the European project, however, besides a shared reluctance to deepen EU integration and an acceptance for strengthening eurozone governance in a multispeed format, the two countries barely share a common vision. This lack of a shared vision is, however, partly the result of a difficult domestic situation that plays a vital role in Hollande’s EU policy. The president has to face the challenge of restoring growth to the French economy and addressing deep French euroscepticism as well as arriving at consensus on EU policy within his own Socialist Party (PS), riven by splits since the debate on the Constitutional Treaty. Common Security and Defence Policy is, by contrast, an area of continuity, and no major change is expected in France’s involvement in developing the policy. Indeed, due to defence budget constraints, the focus will be a pragmatic one on developing concrete cooperation in the industrial field in a bilateral or trilateral format. Partnership with Poland would be fruitful.

France after the Elections and the Future of the European Union

France and the Deepening of the Eurozone: Is There a Way for Franco-German Convergence?

The New French Approach to Common Security and Defence Policy