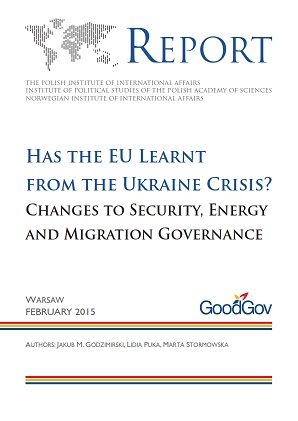 Author(s): Jakub M. Godzimirski, Lidia Puka, Marta Stormowska
Contributor(s): Roderick Parkes (Editor), Brien Barnett (Editor), Dorota Dołęgowska (Editor)
Subject(s): Governance, Environmental and Energy policy, International relations/trade, Security and defense, Military policy, Migration Studies, Geopolitics, Peace and Conflict Studies
Published by: Polski Instytut Spraw Międzynarodowych
Keywords: European Union; Ukrainian crisis; Russian-Ukrainian relations; security; energy policy; migration policy; foreign policy; lessons learnt from past crises and conflicts; migrations;
Summary/Abstract: “The challenge the Ukrainian crisis poses to the European Union’s foreign and security policy can be precisely measured: 50 metres.” The president of the European Commission, Jean-Claude Juncker, was talking about the distance between the Commission’s Berlaymont headquarters in Brussels and the Justus Lipsius building where the heads of EU governments hold their regular summits. Juncker’s is a rather technocratic perspective certainly, but the long walk between the two headquarters is a symbol of a political divide, between the European action and particularist national interests, the cause of internal conflicts and probably also lower governance efficiency in the EU. The Russian-Ukrainian crisis that began unfolding in November 2013 and escalated in February and March 2014 has undermined the unspoken assumption that military conflict in Europe had been confined to the past. The upheaval has been labelled a “return to realpolitik,” “a renewed East-West division,” or “a new Cold War”—terms that directly challenge the EU’s soft and post-modern means of handling international relations. Coinciding with the beginning of a new institutional cycle of the European Union, the crisis has put the bloc’s resilience to external disruptions, as well as its internal efficiency, to the test. And yet, external shocks often result in positive shifts and improvements of internal governance, as they highlight the need to both formulate and conduct successful policies.