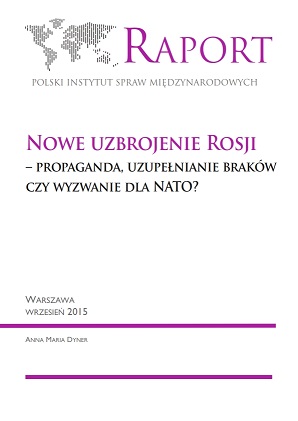 Author(s): Anna Maria Dyner
Contributor(s): Dorota Dołęgowska (Editor), Katarzyna Staniewska (Editor)
Subject(s): Politics / Political Sciences, Politics, Governance, International relations/trade, Security and defense, Military policy, Geopolitics
Published by: Polski Instytut Spraw Międzynarodowych
Keywords: Russian Federation; NATO; Russia’s military policy; security and defence; armed forces; military equipment; new military technologies;
Summary/Abstract: In recent years, Russia has intensified work on new types of weapons for all parts of its Armed Forces. By introducing the new weapon types, Russia wants to base its strength not only on its nuclear forces, which in many cases is completely ineffective as a deterrent, but also on conventional forces. This goal has resulted in the need to replace obsolete equipment and has been financed by the economic prosperity of the country, thanks mainly to high oil prices. With the higher inflows to the country’s budget, Russian authorities managed to increase funds for rearmament. The current economic crisis, however, and in particular the fall in the price of crude oil, the sales of which form the base revenue of Russia’s budget (amounting to about 45%), may result in a loss of funding for the rearmament programmes. The plans may be further limited by technological deficiencies in Russia’s military industry, exacerbated by sanctions introduced by the EU and U.S. in response to Russia’s actions in Ukraine and which prevent the acquisition of Western technology, especially military-grade electronics. In the short- and medium-term perspectives, Russia’s financial problems may result in the need to select priority technologies and choose between the armed forces that will be equipped first. Considering the amount of new equipment introduced by Russia and ongoing research projects on new types of weapons, the most important is the Russian Air and Space Forces, as well as its Strategic Rocket Forces. The country will also invest in weapons for ground troops and naval aviation. A number of changes will also affect the navy, but in this case the reason is mainly the poor technical condition of Russian Federation assets.