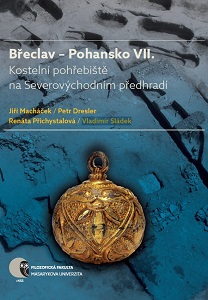 Author(s): Jiři Macháček, Petr Dresler, Renáta Prichystalová, Vladimír Sládek
Subject(s): Christian Theology and Religion, History, Anthropology, Social Sciences, Archaeology, Cultural history, Geography, Regional studies, Library and Information Science, Regional Geography, Cataloguing, Sociology, Middle Ages, Theology and Religion, Cultural Anthropology / Ethnology, Culture and social structure , Evaluation research, Environmental interactions
Published by: Masarykova univerzita nakladatelství
Keywords: Church Cemetery; Pohansko; Břeclav; Great Moravia; excavation areas; archeology; Stone-wall architecture; Czech Republic; medieval Europe;
Summary/Abstract: The excavation of the church cemetery in the north-eastern suburb at Pohansko near Břeclav took place between 2008 and 2012 as part of long-term systematic research into the site which is considered to be on a par with the most important centres of Great Moravia. The field work followed after the unexpected and surprising discovery of an early medieval rotunda which is the second religious structure to be uncovered at Pohansko (Macháček – Balcárková – Čáp et al. 2014). The new research activities in the north-eastern suburb can be divided into three main excavation areas – the Great Moravian rotunda, the church cemetery and the adjoining residential and/or production precinct of the whole settlement area. So far, the greatest attention has been paid to the church which, after the quarter of a century that has passed since the last similar find, augmented the unique and historically valuable group ofthe earliest religious and stone-wall architecture within the territory of the Czech Republic. The discovery has been comprehensively covered by a number of dedicated studies (Čáp – Dresler – Macháček et al. 2010; Macháček 2011; Macháček – Balcárková – Čáp et al. 2014). The excavation of the settlement related to the church has not yet been completed and as such is only marginally mentioned in this monograph. The main focus is aimed at the cemetery where excavation work finished in 2012. The necropolis falls within the category of church cemeteries as defined by Bořivoj Dostál (Dostál 1966, 15–17), and thus belongs to the group of the most valuable funeral heritage monuments from the period of Great Moravia. Its publication signifies the end of the second stage of the most recent archaeological research in the north-eastern suburb at Pohansko.