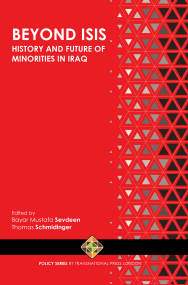 Contributor(s): Bayar Mustafa Sevdeen (Editor), Thomas Schmidinger (Editor)
Subject(s): Politics / Political Sciences, Christian Theology and Religion, Politics, History, Social Sciences, Geography, Regional studies, Sociology, Recent History (1900 till today), Theology and Religion, Islam studies, Security and defense, Studies in violence and power, Nationalism Studies, Migration Studies, Ethnic Minorities Studies, Sociology of Religion, History of Religion, Politics and Identity, Identity of Collectives, Peace and Conflict Studies
Published by: Transnational Press London
Keywords: Iraq; Kurdistan; migration; minorities; Jews; Christians; Shabak; Yarsan; Mandeans; Armenians; Haqqa; Kakai;
Summary/Abstract: This book shares papers from a conference taking a deeper look at the victims of ISIS and beyond that all religious minorities of Iraq. This is the first book that considers all the religious minorities that existed in modern Iraq, including both historic communities and new groups that recently came with labour migration, especially to the Autonomous Region of Kurdistan. The book resulted from a conference in 2018 organized exactly at the site of the Simele Massacre in 1933. The campus of the American University of Kurdistan is located on the site of the first big massacre against a religious minority in Iraq. The conference entitled ‘Beyond ISIS: Minorities and Religious Diversity in Iraq and the Future of Êzîdî, Christians, Shabak, Yarsan, Mandeans and other Religious Minorities in the Middle East’ brought together Iraqi and international scholars, activists, and religious and community representatives. This book contains papers presented at the conference that included contributions on Iraq’s religious diversity and the historical and contemporary consequences of genocide and persecution on the religious minorities of Iraq.

Minorities in Iraq: National Legal Framework, Political Participation, and the Future of Citizenship Given the Current Changes

The Jews of Iraq

The Lost Readers of the Scripture: Some notes on the Karaite community of Hīt

John the Baptist’s Water: Extinction of a Millennial Culture

Fleeing ISIS: Aramaic-speaking Christians in the Niniveh Plains after ISIS

The Yazidis: Religion, Society and Resentments

The Shabak: Between secular nationalisms and sectarian violence

The Haqqa Movement: from Heterodox Sufism, to Socio-Political Struggle and Back

Bahaism and the Bahai Community in Iraq: A Fateful Past and Fragile Present