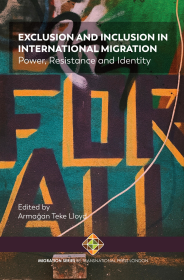 Author(s): Caner Tekin, Lisa Marie Borrelli, Rebecca Mavin, Giorgia Trasciani, Olivia Johnson, Ana Carolina Macedo Abreu, Hari KC, Miguel Santos Neves, Tamaki Watarai, Ana Santamarina, Evdokia Kogia, Styliani Liberopoulou, Nikolaos Alamanos, Vasilis Pierros, Christos Michalakelis, Simeon S. Magliveras
Contributor(s): Armağan Teke Lloyd (Editor)
Subject(s): Politics, Gender Studies, Media studies, International Law, Human Rights and Humanitarian Law, Communication studies, Labor relations, Security and defense, Cultural Anthropology / Ethnology, Social differentiation, Rural and urban sociology, Migration Studies, ICT Information and Communications Technologies, Politics and Identity, Identity of Collectives
Published by: Transnational Press London
Keywords: migration; policy; migration; exclusion; inclusion; identity; labor relations; Brazil; Austria; Germany; security; female migrants; gender; human rights; international conventions; Kingdom of Saudi Arabia; RefConnect; social networks;
Summary/Abstract: People on the move face new barriers in a globalizing world. Some of these barriers are related with the rise of an increasingly security-oriented approach towards international migrants. Notwithstanding the forces of globalization, states have maintained their monopoly power over whom to admit and whom to deny within their borders. In other words, they remain the sovereign authority regulating the entry and exit of people. However, in recent years, a number of states have singled out international immigration as the greatest political and social threat to their cultural and national security. The securitization of immigration is founded upon the premise that the international movement of people represents an exceptional risk for the survival of the nation and this is often associated with terrorism, instability and criminality. The securitization of immigration is also based on the idea that the ‘traditional’ authority vested in states to regulate immigration is somehow insufficient and needs to be enhanced. These assumptions correspond with a real policy shift in some countries such as the United States, where the government is planning to spend approximately 23 Billion Dollars on border security and immigration enforcement in 2019 alone." "This edited volume is an exploration of the global landscapes inhabited by refugees and labour migrants, although the focus is largely on the former. Despite the fact that most of the empirical studies are drawn from within Europe, the book also includes research on Nepal, Australia, the Middle East and Japan in order to reveal the truly global dimensions of migration and the regimes governing this.

Coming to Terms with Liberal Democracy by the Populist Radical Right Parties of Western Europe: Evidence from European Parliament Speeches over Minorities and Migration

Policing Migrants in Transit and Upon Arrival: The Bordering Tactic of Integration in Austria and Germany

The Body and Embodied Experiences in the British Asylum System: Developing a Conceptual Perspective

Multi-level Governance of Human Mobility: Ending Discrimination and Promoting and Protecting Human Rights of All People on the Move

From Invisible to Visible: Brazilian Female Migrants’ Occupational Aspirations under the Force of Visibility in Japan

Halo-Halo, Nostalgia and Navigating Life for Overseas Filipino Workers (OFW’s) in the Kingdom of Saudi Arabia