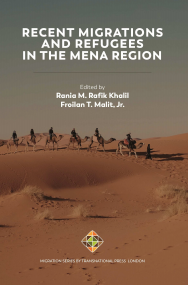 The Syrian Youth Refugees’ Social and Economic Engagement in Lebanon

Attitudes of Social Work Students towards Syrian Refugees in Turkey

Mobilities from the Exile: the Sahrawi student migrations

Politics of Hosting Syrian refugees: Cases from Jordan and Lebanon

Conflict Responsive Patterns of Labour Migration from Hatay, Turkey to the MENA Countries