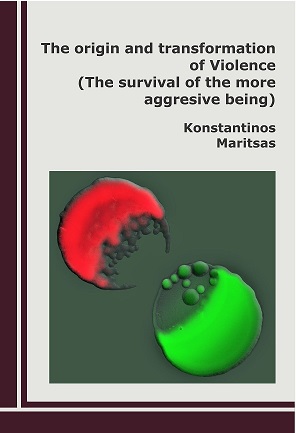 The survival of the more aggressive Being

Author(s): Konstantinos Maritsas
Contributor(s): Katya Melamed (Editor)
Subject(s): Philosophy, Social Sciences, Gender Studies, Social Philosophy, Sociology, Studies in violence and power, Victimology
Published by: КМ Издателство ООД
Keywords: Violence; civilization; gender; war;
Summary/Abstract: In order to define the violence, there was only one way – to trace its creation; to understand how and why the necessity for it arose.At the beginning I was thinking with my brain, the brain of an ordinary Homo sapiens, about what I would do if I was living in the conditions of prehistoric people. And… all this led me to the same dead ends that I was reading about in the books.Then I understood that there was a mistake. I realized that my way of thinking was the wrong way round.None of the primitive people decided to tame animals, because nobody knew what a tame animal was. None of the primitive people decided to talk, because nobody knew what a language was. None of the primitive people decided to cook, to draw, to get dressed, to become religious, because nobody knew what art, clothes or religion were.And then? Then how has man created these civilizational conditions?The answer is very simple: unconsciously! (In the book I mention cases where unconscious creation has been proposed by figures such as Darwin and L. Morgan.) The primitive man firstly created “something” and then a next generation came that would find the ready “something” and would name it. For instance, violence. Man started to use violence. The formation of violence continued through hundreds of generations. In the end, one generation was born with a ready-made violence. This generation named “that thing,” they called it “violence” and started exploring it. They found in the existing-already violence physical, sexual violence, emotional, psychological, spiritual, cultural, verbal abuse, financial abuse, and neglect side. And all this at the end of the violence creation. There was no prehistoric man who decided to create that violence with multitude sides.